With the global demand for cheap electricity growing in the last two decades, the introduction of renewable energies had to be considered. The use of solar energy in Eritrea started in 1995. Eight years ago, there was only 2% coverage of the solar energy but now the figure has increased to 10%.

Many endeavors have been made in the past to support the country’s fuel-based electricity grid in order to provide a stable power supply across the country. Several solar power projects are underway in many places to respond to the country’s growing demand of energy and comply with the seventh goal of Sustainable Development Goals (SDG) of 2030 which promotes affordable and clean energy.

In 2004, a home grown company called E-tech have been established with a mission of introducing technology and transferring knowledge that includes assembling and providing computer and electronic appliances to educational and other institutions.

It is an efficiency-oriented company that gradually aims to increase this motive through experience and knowledge gathering. At the moment E-tech is focusing more on projects of assembling solar panels and proving solar energy to development sites.

Recently, this company has been able to install 2 megawatt solar powered energy in the Adi-Halo site in a short period of time. Since 2014, E-tech has been fully committed to spreading its new capacity of providing solar energy to agricultural and other national development sites assisted by its local employees.

The solar energy project administered by E-tech uses a hybrid system – it can connect and flow to the electrical grid operated by generators.

Major Aklilu Habtemariam, head of E-tech projects across the country, said that the Adi-Halo site solar project installed in just three months has the potential to supply power to nearby villages, factories as well as educational and health institutions.

Another 2 megawatt solar energy is to be set up in the same area to boost future economic activities on the site. 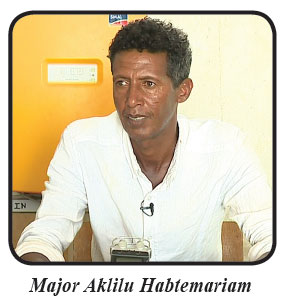 Major Aklilu further said that there is a national plan for the solar power generated from the panels to be synchronized with the national grid, though the process of electrification varies depending in the day and night operations.

The Fuel Save Controller (a component in the generators) controls the procedures of the flow of power and likewise interchanges it between the main power supply generators and the installed solar power panels.

Despite the big initial investments of such amount megawatt solar panels, their durability is certain to last for decades and the only running cost will be a regular sanitation. The solar panel will remarkably reduce the daily fuel consumption by lowering the operation hours of generators.

It is believed that the solar energy panels can generate up to 75% of the needed power supply in day time, with the generators covering the remaining 25%.

Nonetheless, the high temperature in the eastern and western lowlands of Eritrea lowers the insulation of the solar panels, reducing the energy to be generated. In the highlands, the insulation is higher and more reliable.

Sometimes in the summer, clouds make it harder for the solar panels to charge and supply power. At these times, a hybrid energy power generation is used to help keep a consistent flow of energy.

Most of the employees of E-tech are graduates of the Eritrean Institute of Technology (EIT), which include civil engineers, designers, electricians and others. There are up to 400 employees deployed in similar projects throughout the country. These employees are directly recruited from the College and most are new to the practical applications of the solar energy installations. The synergy among these employees is highly commended by the head of the company. The employees admit that they have gained an interesting experience in a limited period of time.

Solar energy systems are presented in many forms and megawatts. The home-based solar energy systems are so small, they cannot even produce sufficient energy for a fridge, but they can supply each home with lights, a mobile-phone charger, and, if households can afford it, a small, super-efficient flat-screen TV.

Introducing efficient renewable energy such as solar power minimizes the cost of electricity consumption per kilowatt. If properly utilized, it makes a big difference on household and organizational saving patterns, and boost the economy of the country.

E-tech is a locally established and gradually evolving technological company with a vision to grow into regional and international technology company.

Major Aklilu said, E-tech plays a massive role inside the country’s development tracks and is working efficiently to initiate competitive grounds in the region and internationally. This company has proven that it can provide advanced technology and develop human resource that is contributing to the national development.