“For how long will they [Al Jazeera] continue to tamper with the security of Egypt and the Arab world?” – Dubai Security Chief Lieutenant General Dhahi Khalfan

Dubai’s security chief Lieutenant General Dhahi Khalfan, known for his controversial social media posts, has called for Al Jazeera to be obliterated. The General accuses the Qatar channel of siding with the perpetrators of this week’s deadly Sinai attack.

“The alliance must bomb the machine of terrorism… the channel of ISIL, al-Qaeda and the al-Nusra front, Al Jazeera the terrorists,” Khalfan wrote on Twitter to his 2.4 million followers, using an older name for Islamic State (IS, formerly ISIS).

“For how long will they continue to tamper with the security of Egypt and the Arab world?”

Khalfan, who has been a key agitator in the ongoing standoff between Qatar and other Gulf States, underlined his point by putting out a composite picture that placed the channel’s logo next to images of ISIS leader Bakr al-Baghdadi, Osama bin Laden, Hezbollah chief Hassan Nasrallah, and Muslim Brotherhood ideologue Yusuf al-Qaradawi, who has his own show on the channel.

The Doha-based Al Jazeera has replied by saying that it is Khalfan who is inciting terrorism, and said that he would bear responsibility for any attacks against its journalists.

“The UAE needs to respond. Khalfan is not just an Emirati citizen but an official in the UAE government. He is using a moment of anger and grief over the terrible attack in Sinai to fuel his hatred against Al Jazeera.” Yaser Abuhilalah, managing director of Al Jazeera Arabic, told al-Quds al-Arabi.

On Friday, militants operating under the Islamic State banner carried out a shooting and bombing of a Sufi mosque in northern Sinai, killing over 300 people, including more than 120 children.

While Al Jazeera did not endorse this or previous terrorist attacks carried out in the name of Islam, it has been accused of terrorism links ever since it became the station to broadcast bin Laden’s messages to the world, which were handed over to its journalists by Al-Qaeda representatives. 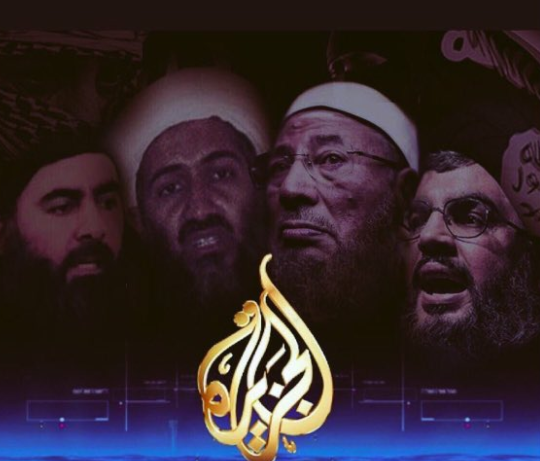 Critics have also said that it serves as the propaganda arm of the Qatari state and particularly its security services, promoting their agenda in supporting various movements in the volatile region. Multiple Al Jazeera journalists were arrested in Egypt, where its offices were forced to close in 2013, at the behest of the current regime, over their on-air support of the Muslim Brotherhood.

The channel, which began broadcasting in Arabic in 1996, says that it merely operates outside the national restrictions that hobble other regional broadcasters, insists that it is providing independent journalism, and cites its high ratings in multiple countries as evidence that its editorial lines find resonance with viewers.