Djibouti Goes from Position of Strength to Potential Downfall

BY GAVIN DU VENAGE | THE NATIONAL

It has been a trying few weeks for Ismaïl Omar Guelleh, president of Djibouti, at a time when most other residents of the Horn of Africa are celebrating emerging peace and, with it, the glimmer of prosperity.

Two old enemies Eritrea and Ethiopia have ended 20 years of bloodletting, and even the restive enclaves of Somalia appear ready to reach across the table to former foes in the region. The war involving Ethiopia cut off the landlocked country from Eritrea on the Red Sea coast. As a consequence, 95 per cent of Ethiopian trade flowed through Djibouti’s ports. The war’s end means Ethiopia has alternative port options in Eritrea once again.

Now, Djibouti has lost at the arbitral tribunal of the London Court of International Arbitration, which ruled that the Djibouti government’s seizure of control of Doraleh Container Terminal from DP World earlier this year was illegal.

The finding was a blow to Djibouti, which is already dealing with questions about its reliability as an investment destination following the port grab.

Just six months ago it all seemed so different. Apart from its logistics hold over Ethiopia, the enclave located on the strategic Horn of Africa was home to at least six foreign military bases that assured both security and income.

In addition, China was pouring in billions to build a new port and free trade zone, making Djibouti an anchor of Beijing’s strategic “Belt and Road” project. This would put Djibouti at the centre of a grand plan to create a Chinese economic zone that spanned much of the globe.

“Many are dreaming of creating, with Chinese help, something similar to Singapore and the Gulf states,” German publication Spiegel gushed in a Djibouti spread, just last February.

With Eritrea now easing back into the international fold, and its ports once again open to Ethiopia, Djibouti’s logistics value is less certain. The seizing of the DP World’s port concession could not have been worse timed.

Now, potential investors had been put on notice that their capital projects could be taken by Mr Guelleh’s government at any time, Mr Besseling adds.

“Such interventions are likely to deter further foreign investment in the services sector, while Djibouti’s natural resources are negligible.” 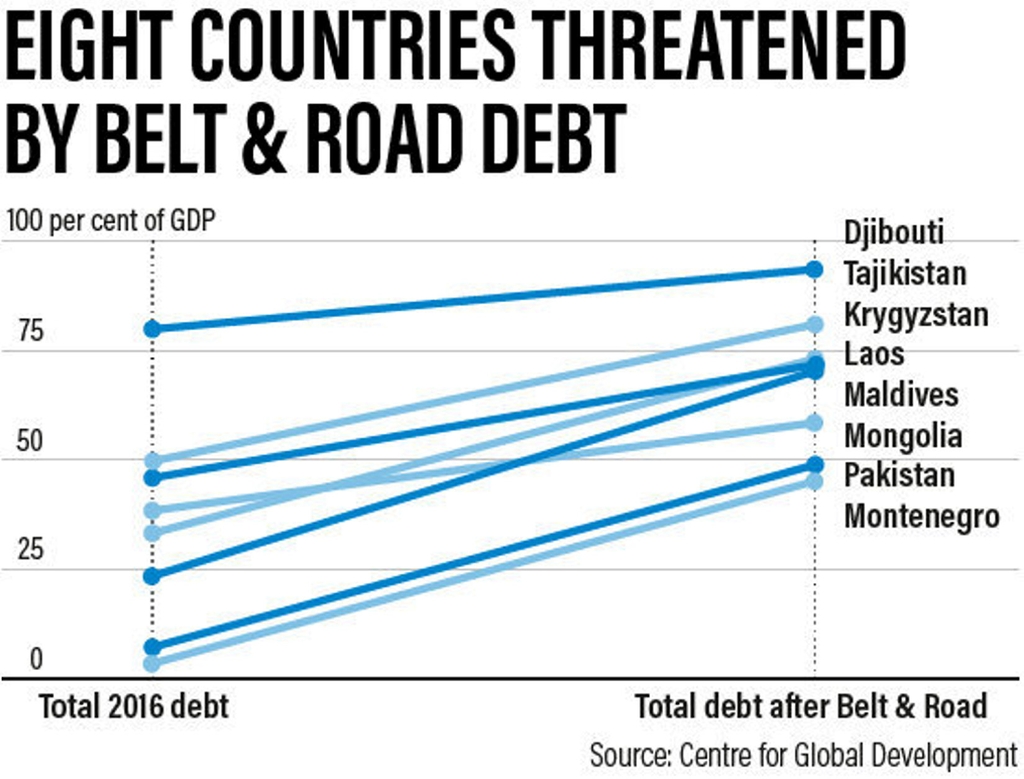 Meanwhile, Djibouti must figure out how to deal with the rapidly growing pile of debt it owes Beijing. This is set to grow to around 88 percent of the country’s overall GDP of $1.72 billion, according to a report published in March by the Centre for Global Development, a US non-profit based in Washington DC.

It is hard not to see a looming similarity with Sri Lanka, which racked up more than $8bn worth of debt to Chinese banks. Most of the money was spent on Chinese contractors who built the Hambantota port, a colossal white elephant as it turned out.

Unable to service the debt, Sri Lanka this year signed over a 70 percent stake and a 99-year lease to Beijing, which includes 15,000 acres of surrounding land. Perhaps the same fate awaits Djibouti, should it find itself struggling to meet its debt to China.

Mr Guelleh is therefore in a deep hole. He does, however, have some cards left. “Ethiopia has also developed strategic infrastructure around the Doreleh terminal, which means that the port is likely to remain central to Ethiopia’s trade for the foreseeable future,” says Olivier Milland, senior analyst at Allan & Associates in London.

Much of this was also built with Chinese money and, like Djibouti, Addis Ababa also has debts to Beijing. Similarly, just six months ago the Ethiopia-Djibouti railroad was launched, cutting a three-day journey to just eight hours. The Chinese built and financed line cost $4bn and Ethiopia will have an incentive to keep it as busy as possible.

Mr Milland notes that last month Djibouti inaugurated the first phase of a $3.5bn Chinese-built Djibouti International Free Trade Zone, which should generate capital for the medium term at least, particularly from the Chinese.

Located on the other side of the Gulf of Tadjoura from the Doraleh port, it will be jointly run by the Djibouti Ports and Free Zones Authority and China’s Merchants Holdings Company. However, immediately after the launch, DP World threatened legal action against third parties if they violated its concession agreement for Doraleh Terminal, which could make moving goods to and from the free zone a challenge.

In the meantime, given its level of infrastructure, “the Doraleh container terminal is likely to remain a strategic international trading hub for the region over the long-term”, Mr Milland says.

If Mr Gulleh can put to rest his differences with DP World, and assure investors that the country is indeed a secure destination for their business, Djibouti can continue to thrive.

“It is true that Djibouti faces stiffer competition from its neighbours Eritrea and the self-declared state of Somaliland, but it is less clear what this means to the wider geopolitics of the region,” Mr Milland says.

“The country still boasts the largest and most modern ports in the region, with millions of US dollars slated for more foreign investment in the coming years.”

Meanwhile, following Djibouti’s announcement that it would not comply with the London court’s ruling that its seizure of the port was illegal, DP World said at the weekend it was considering its options, although it has long ruled out accepting a financial settlement in the dispute.