The one power that has been barred from building a base in that country is Russia.

By John Aglionby and Simeon Kerr | for Financial Times

Djibouti is finalising an agreement with Saudi Arabia to allow the Gulf state to build a military base in the Horn of Africa nation as Riyadh takes a more assertive approach to regional security.

Djibouti, a Muslim nation that is strategically located on the Red Sea and the Gulf of Aden, already hosts US and French military facilities. The first Chinese base outside of China is also under construction and due to open this year, Mahmoud Ali Youssouf, Djibouti’s foreign minister told the Financial Times.

Saudi Arabia signed a security agreement with the government last year and followed up with a judicial co-operation accord this month as part of its preparations for a base, Mr Youssouf said.

Riyadh is leading a coalition fighting Houthi rebels in Yemen, which lies across the Red Sea from Djibouti. Saudi Arabia backs forces loyal to Yemen’s exiled government, which control Aden and other parts of southern Yemen.

“We’re going to sign a military co-operation agreement soon in Riyadh,” Mr Youssouf said in an interview. “I cannot give you the details because this is military stuff and is classified. But you will see when it will happen.”

Riyadh’s closer ties with Djibouti coincide with attempts by the kingdom to bring fellow Sunni nations into a grand alliance to project power and rely less on western military backing. Saudi Arabia is also seeking to counter what it regards as Iranian interference in conflicts in the Arab world from Syria to Yemen.

The US uses Djibouti as a base for its Africa headquarters and its regional anti-terror operations. In addition to its garrison of 4,000 personnel, Washington’s facilities include drone ports.

Beijing has said little about its base, other than that it will be a logistics supply facility and have the capacity to house 10,000 troops. The one power that has been barred from building a base in the country is Russia because Djibouti did not want to “become the terrain for a proxy war”, Mr Youssouf said.

“We just felt that the time of having a Russian presence in Djibouti was not appropriate because of what was going on in Syria and Ukraine and other places,” he said. “We felt that conflicting interests could really rise up here in Djibouti . . . and we said, ‘OK, we don’t want to have two superpowers in this country that could be face to face in a conflicting situation’.”

The world’s superpowers are competing for global influence in this tiny, impoverished country in the Horn of Africa. 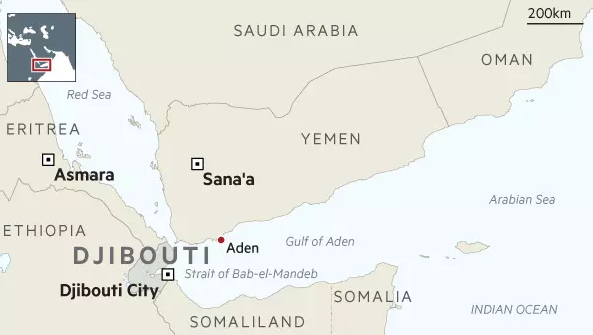 Foreign governments are drawn to Djibouti, which also borders Somalia, a country blighted by years of conflict and Islamist attacks, because it is safe, Mr Youssouf said. “No pirates, no terrorists, no ambitious countries coming to attack us, a small country.”

It is also tightly controlled, with opposition groups and human rights organisations criticising the level of repression and lack of basic freedoms.

Mr Youssouf said the “military forces are in Djibouti to fight piracy” to make the Strait of Bab el-Mandeb, a vital waterway that links the Red Sea to the Gulf of Aden, “safer.”

“These forces are present to fight terrorism in Yemen and Somalia, to avoid that these terrorists go and blow themselves up in New York or Berlin or London,” Mr Youssouf said.

The United Arab Emirates, which has also focused on developing greater military capacity and is a key ally in Riyadh’s campaign in Yemen, has enhanced its reach with a base in Eritrea.

The base near Assab, a Red Sea port, hosts attack helicopters, fast jets, drones and naval vessels, according to satellite imagery analysis.

The influence of Houthi rebels over the Bab el-Mandeb strait has raised concerns for the safety of shipping routes. A UAE vessel was badly damaged in October and failed attacks on US naval vessels prompted the US to destroy radar stations on the Yemeni coast.