Six months after the inauguration of its first military base in Africa, Beijing has expressed its “displeasure” to the president of Djibouti

In November 2017, Djibouti’s President, Ismail Omar Guelleh, was received in Beijing with great fanfare by the Chinese president. But behind the official statements and the signing of a “strategic partnership”, Xi Jinping also recalled that Chinese investments in Djibouti were a source of concern for his Government.

The Djibouti president may praise in length of speech the special relationship he has forged with China, the reality on the ground is quite different. Administrative delays, political corruption at all levels, not to mention the crisis in neighboring Yemen, the Sudan and Somalia.

The area is not easy to make the trade, but it remains vital for the transit of raw – and especially oil – between Africa and China.

Is the tea towel burning? The Chinese companies who hoped to win contracts in the area began to become disillusioned. Thus, the work of the two new airports entrusted to China Civil Engineering Construction Corporation (CCECC) is questioned. That of Ali Sabieh, Djibouti’s second city, had two airstrips, with the capacity to handle 600,000 tonnes of cargo a year. The second was to serve the Bab-el-Mandeb Strait, a strategic area for international trade and for China.

But the two contracts signed by CCCEC in January 2015 have been brutally called into question. The reason for the quarrel is not clear, no one obviously wishing to comment, neither Chinese nor Djiboutian side.

Electricity, transport, logistics … contracts are all more or less challenged one after the other, and nothing is really guaranteed for Chinese companies, which learn the harsh reality of the negotiations on the ground in an area riddled with corruption and political conflicts.

According to Africa Intelligence, the exasperation of the Chinese has reached its peak when president Ismail Omar Guelleh backtracked on his promise to leave their monopoly of free zones in the country, thus opening the game to Indian and Emirati groups. A competition that saw Beijing, who thought to crush all the world through its military and financial power and the famous ‘strategic partnership’. But the national game is much more complex.

In January, the Chinese Ambassador to Djibouti, Fu Huaquiang, presented a message of “dissatisfaction” of the Chinese Government to Ismaïl Omar Guelleh.

For its part, Djibouti is annoyed by the haughty attitude of China, whose military are much more numerous than expected on its territory. We talk about 10,000 soldiers in the fortress base inaugurated by Beijing in August 2017, where the exercises of the People’s Liberation Army are impressive, especially with its type 095 and 90 – II tanks, the most modern ever used in Africa. 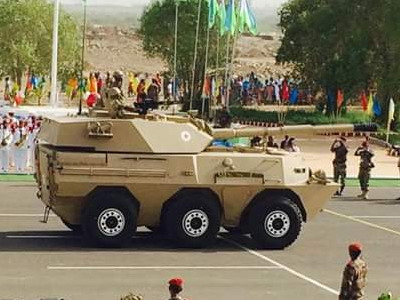 Ismail Omar Guelleh has even expressed his dismay in Paris. During his meeting with President François Hollande just a year ago, he was openly worried about the much more massive presence of Chinese soldiers.

According to the records of interviews, the Djibouti president also revealed during this one-to-one that the lease of land by armed Chinese came in a deduction of the debt incurred by Djibouti to China, which holds 60 percent of Djibouti’s debt.

President Guelleh plays big in this case. If he wants to remain the darling of the Chinese president, he will have to quickly put a little order in the files, so that Americans and French hope to calm the Chinese enthusiasm in their garden. The American base of Camp Lemonnier is indeed a cable away from the Chinese base, and never the soldiers of the two countries have been so close to each other.

China has relied heavily on Djibouti and its strategic position in the Horn of Africa. In five years, Beijing has injected some 14 billion dollars (11 billion euros) into the Djiboutian economy. There was even talk of the emergence of an African Dubai, but the case could run short.

“Djibouti is only the beginning of a new era for China. It’s all about protecting its commercial interests,” says Benjamin Barton, Professor of international relations at the University of Kuala Lumpur.

“Until then, China had no access to any military port in the region. A Chinese ship even remained 134 days at sea for lack of port of reception. Another problem, we have seen with Libya and Yemen, the ability of China to evacuate its expats in case of war or serious crisis. Chinese defense attachés in Africa have had a hard time finding logistical solutions to evacuate their fellow citizens. China, therefore, needs a permanent base in the region.“

But perhaps Djibouti is not the ideal plan and Beijing is already looking for an alternative solution. Negotiations have resumed with Namibia to build a second military base in Africa, Walvis Bay.

Further to the North, Beijing seeks to place his pawns between Egypt, Syria, and Yemen. A presence in Oman is also planned by the People’s Liberation Army, but also by the Indian army, which promises to further increase tensions between the two Asian giants.

Further East, there is a talk of Chinese military base in Pakistan, while another has just been confirmed in Afghanistan. A sanctuary cordon, in a way, that would allow Beijing to fully secure its Maritime Silk Road between China and Africa. (* Software translation from French)