With 7 categorised climbs included in today’s 140km from La Ravoire to Vaujany, everything was geared toward an exciting stage and the racing did not disappoint. Constant attacking from the gun made it difficult for the break of the day to form. Eventually 4 riders went clear after around 20km of racing but there was a large group of nearly 25 riders chasing these 4 at 30 seconds, the peloton a further 30 seconds back. Team Dimension Data for Qhubeka had Daniel Teklehaimanot, Edvald Boasson Hagen and Steve Cummings in the chase group.

Teklehaimanot was chasing King of the Mountains points today and with the help of his two teammates, the big chase group caught the 4 leaders just before the category 1 Col du Barrioz.

Teklehaimanot was strong enough to go over the summit in first place, adding 10 points to his tally. The next climb was the category 2 Col des Ayes and nobody could stop our Eritrean from taking maximum points on the line there either. Teklehaimanot now just had to complete the stage in order to pull on the polka dot jersey.

The peloton wasn’t content with having such a big group out front, heading into the last half of the stage. Tinkoff kept the chase going until the 25 lead riders sat up and returned to the peloton, bar 5 riders. These new attackers were able to ride ahead by 2 minutes before the road started rising toward Vaujany. Tinkoff kept controlling the pace and as the race approached the final 6.8km climb to the line, Sky and FDJ also began working.

Team Dimension Data for Qhubeka had Igor Anton and Serge Pauwles riding among the main contenders up until 3km to go. This is where Team Sky made its mark on the stage with Mikel Landa the first to attack, reeling in the breakaway riders at the same time before Froome countered and went into the lead with Porte in tow. Froome took a good win and Pauwels was our African Teams best placed finisher on the day in 22nd. It worked out to be a fantastic day for Team Dimension Data for Qhubeka though because Boasson Hagen retained his green sprinters jersey and Teklehaimanot pulled on the polka dot jersey. 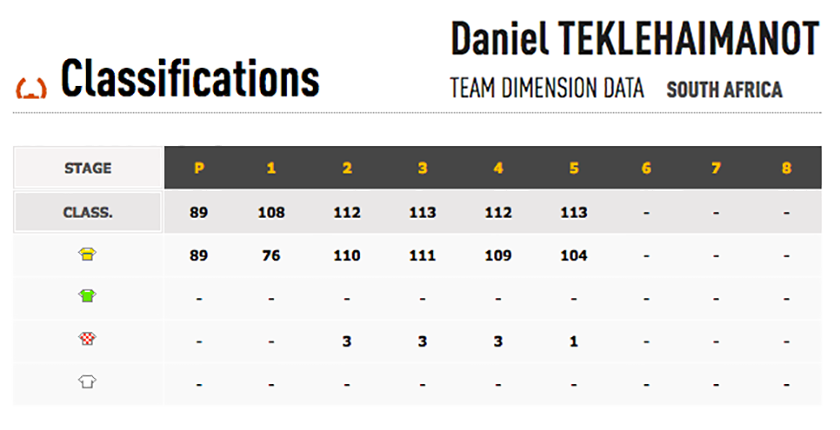 Daniel Teklehaimanot: «The polka dot jersey is my goal again»

“I like the polka dot jersey a lot. So I’m really happy again today. I won the King of the Mountains competition last year. Of course it’s my goal to win it again this year. Tomorrow it’s very hilly. I’ll try to keep the jersey but it won’t be easy. What I and my team achieved last year gave us a lot of motivation to perform again this year at the Dauphiné and the Tour de France.”