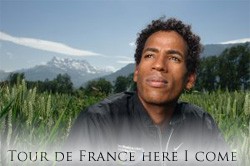 Daniel is now a respected figure on the U-23 cycling circuit both in Africa, Europe and worldwide

When Eritrean athlete Daniel Teklehaimanot first began appearing on Europe’s cycling podiums, he was something of a novelty factor. His coach at the World Cycling Centre (WCC) in Switzerland, Michel Thèze, recalls the surprise of certain announcers who had to ask him where Eritrea was and how was it possible that this lanky young African was rivalling Europe’s best up-and-coming cyclists.

For Michel Thèze, Daniel’s performances were no surprise. He knew he had quite an exceptional athlete on his hands.

Today Daniel has become a recognised and respected figure on the U-23 circuit, not only in Africa and Europe, but worldwide. Hardly surprising therefore that he was approached by Australia’s new venture GreenEdge, which is hoping to become the first Australian squad to secure a UCI ProTeam licence.

The signing of a two-year contract with GreenEdge is the beginning of a new chapter in this young African cyclist’s life. A life which, over the last three years, has been split between Europe and Africa. In Europe, with the National Federations Mixed Team managed by the WCC, he has impressed with his performances in the UCI Under-23 Nations Cup, including 6th place overall in the 2009 Tour de l’Avenir, and a stage win in the Nations Cup Ville de Saguenay in Canada last year. In Africa this year he followed up his six continental titles (team time-trial, individual time-trial and road race in both the Under-23 and elite categories) with a win in the nine-stage Tour of Rwanda.

The quietly-spoken 22-year-old Eritrean is not one to shout out from the rooftops. But behind his apparent reticence to talk too much about himself, lies a determination to succeed. He doesn’t say a great deal, but when he does it’s to the point:

“I knew I wanted to be a professional cyclist when I arrived (at the WCC),” he confirms.

That was three years ago. It was then up to Michel Thèze to take this raw talent and mould it into professional material. Daniel’s physiological tests were extremely promising but it was impossible at first to realise the extent of his potential. The WCC has hosted hundreds of trainees in the different cycling disciplines who, for the large part, have arrived from countries that do not have the necessary facilities and structures to nurture their top young riders. All are talented, but it takes time to find out which will go on to make their mark on the international scene.

Daniel’s beginnings in Switzerland did not go as planned: a routine medical check revealed a tachycardia which required him to undergo a heart operation.

What first impressed his coach was the Eritrean’s amazing recovery after that surgery at the beginning of 2009: “He began cycling again in May, and in one month was already at a very high level. I think that is when I really realised he had what it took.”

It was also the beginning of the hard work: cycling has become Daniel’s life. Together with the other WCC trainees he now eats, sleeps and lives cycling. As well as the physical training, time is also spent in the classroom: all trainees attend language courses (either French or English) at the WCC.  It is a hard and intense life, but one in which close ties and special friendships develop, something that Daniel particularly appreciates.

“It’s a good place. I have made lots of friends and received lots of good advice. I will always keep in touch with the WCC and Michel.”

So how does his coach and mentor feel about the Eritrean’s move to GreenEdge?

“It’s definitely not a bad choice. I gave him advice about the contract and the practical details but it is Daniel who had to make the decision. It’s his career. We don’t know a lot about the team yet, but it was important for him to go somewhere where he had the best chance of succeeding.”

Daniel may be moving on, but Michel Thèze will not be cutting the apron strings entirely. He will keep a close eye on the progress of this young man who in his coach’s eyes has not entirely finished his apprenticeship.

“Daniel has enormous qualities and he adapts well to different situations. But he still has work to do. He’s fragile; he lacks the real fighting spirit. But he can learn that. Of course he can.”

Daniel’s contract with GreenEdge starts from 2012. For the moment, he is still at the WCC and when he does leave, he won’t be going far: GreenEdge will be based in Varèse, Italy, just a few hours by car from the WCC in Aigle.

“The contract he has signed is only for two years, which takes us up until the end of 2013,” points out the coach. “We don’t know what will happen then. We’ll keep in contact.”

Jane Moraz is a New Zealand-born journalist who works as a writer at the International Cycling Union in Switzerland.