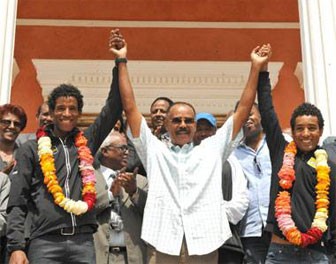 Thousands of Eritreans today poured onto the streets of Asmara to welcome the two riders that made their country and people exceedingly proud in the just concluded Tour de France.

African stars Daniel Teklehaimanot and Merhawi Kudus today received by far one of the most incredible and biggest hero’s welcome ever that extended from the Airport all the way to Bahti Meskerem square.

In a ceremony that lasted for four hours and broadcasted live from the streets of Asmara to audiences all over the world, the two riders mounted on a convoy of polka-dotted luxury cars and drove through the city towards the presidential palace where the President is awaiting them.

After a brief reception with President Isaias in the presence of many higher government officials, the two riders finally heading to the main scene of celebration, Bahti Meskerem square, where thousands of cheering crowds awaiting.

Pure ecstasy quickly filled the atmosphere as Daniel and Merhawi arrived at the scene.

Thanks to these two riders, a new standard has been set for African cycling that the ultimate goal from now on is not to win African Championship but winning at the World Tours including the Tour de France.