The west uses “democracy”, as in elections, to control Africa. This has resulted in over half a century of murder and mayhem because all but one African country is a mixture of different ethnicity’s and nationalities with tribalism dominant in African societies.

Elections mean tribal winners and tribal losers and no in between, or consensus based governance. This has been a recipe for disaster, as in tribal conflict, since the end of direct western colonial rule and the imposition of neocolonialism after WW2.

Its called “divide and rule” and towards this end western style “democracy” has been a big hit in Africa as far as Pax Americana and its western minions are concerned.

In more recent times “crisis management” has been the de facto policy, as in create a crisis (tribal conflict in the run up to an election) and then manage the crisis to better rape and pillage African resources. As long as the “native tribes” are killing each other the less chance of any sort of “united front against Imperialism” as in independent, nationalist African governments demanding a fair share of Africa’s wealth.

Western “democracy” is all about controlling Africa for western benefit, something crucial to the ability of the western leaders maintaining the support of their population by being able to deliver the goods, economically speaking, in the form of higher standards of living. It is African blood that pays for the rich lifestyles of the western populace, and African blood that pays for social peace in western societies.

The western elites don’t care if it is buy, rig or steal when it comes to African elections as long as “my bastards” win everything is copacetic. Election instigated tribal violence is so standard that when an election is fixed without an outbreak of murder and mayhem it comes to be a cause of wonderment in the western media. The very first thing Pax Americana and its vassals demand after any African crisis are “elections”. And sure enough, another crisis is brewing.

Western “democracy” is really American “democracy” for the system used in Europe, and most of the rest of the world, originated in the United States of America. The amazing job of brainwashing that has been done to convince both Americans and their acolytes internationally is that somehow American Democracy was ever something progressive.

The historical fact is that the war for independence by the British colonies in North America was a counterrevolution for the purpose of preserving slavery. That’s right, Washington, Jefferson et al were fighting for independence for the British colonies to preserve slavery, the most criminal, inhumane and barbaric crime against humanity the world has ever known, the enslavement of Africans in subhuman bondage.

Thanks to cutting edge historians such as Dr. Gerald Horne, amongst others, there is indisputable historical evidence to convict the founding fathers of the USA of waging war to preserve slavery, which, with the help of the slave owning French aristocracy, succeeded in doing so for almost another century in the USA. 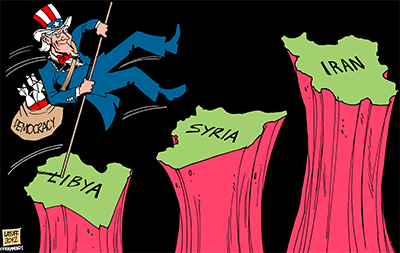 Britain had outlawed slavery in the British Isles and Washington, Jefferson et al saw the handwriting on the wall, that their way of life based on the barbaric exploitation and degradation of Africans could only be preserved by independence from Britain. So they formed the Colonial Congress and carried out their counterrevolution with its goal to preserve their barbarism, for the system of slavery they enforced so viciously can hardly be considered civilization.

The historical record of the form of barbarism practiced by the slave owning leadership of the newly independent USA is most powerfully exemplified by what is probably the only reliable first hand account of how that “Founder of American Democracy”, Thomas Jefferson treated “his” Africans.

“After dinner the master [Jefferson] and I went to see the slaves plant peas. Their bodies dirty brown rather than black, their dirty rags, their miserable, hideous half-nakedness, these haggard figures, this secretive anxious air, the hateful timorous looks, altogether seized me with an initial sentiment of terror and sadness that I ought to hide my face from. Their indolence in turning up the ground with the hoe was extreme. The master [Jefferson] took a whip to frighten them, and soon ensued a comic scene. Placed in the middle of the gang, he menaced, and turned far and wide [on all sides] turning around.

Now, as he turned his face, one by one, the blacks changed attitude; those whom he looked at directly worked best, those whom he half saw worked least, and those he didn’t see at all, ceased working altogether; and if he made an about-face, the hoe was raised to view, but otherwise slept behind his back”. (Thanks to “The Many Headed Hydra…” for the previous quotation)

This first hand account is from a founding member of the French “Society for Friendship with Blacks”, the first French antislavery organization. His name was Constantine Volney and he was the author of that African-Centered classic historical work, “Ruins; Or, Meditations on the Revolutions of Empires” in 1791. It is a fascinating account about his visit to Africa’s Nile Valley as a part of Napoleon’s scientific team before the last major desecration’s began.

Being an honest, antiracist historian, Volney believed, based on what he saw with his own eyes in the Egyptian tombs and temples, that civilization began in Africa, on the banks of the Nile River.

In his own words; “It was there that a people, since forgotten, discovered the elements of science and art, at a time when all other men were barbarous, and that a race, now regarded as the refuse of society, because their hair is wooly and their skin is dark, explored among the phenomena of nature, those civil and religious systems which have since held mankind in awe”.

“Ruins” was one of the most widely read historical texts of the late 18th and early 19th century. It was published in 6 languages in over 15 editions.

Volney was eventually driven from the USA by the forerunner of the Undesirable Aliens Act, passed by a slave owner Congress still having difficulties achieving a good nights sleep, haunted by dreams of the revolution in Haiti and the slaughter of their fellow slave owners by their erstwhile captives, Toussaint and his fellow Africans.

Thomas Jefferson was the author of the Constitution of the United States of America which with its hypocrisy drenched words of “All men are created equal” is supposed to be the template for the governance of African societies?

Its bad enough that whites and asians accept this falsehood but that it is essential that we in Africa must do so as well?.

Any wonder why western “democracy” has brought about so much murder and mayhem in Africa? That a system that was created by a society that treated Africans so barbarically should only result in barbarism in Africa when forced upon the people here?

It is more that a little ironic that the very structure used to govern the newly independent slavery dominated USA was plagiarized from the League of the Iroquois, the federation of American Indian nations whose grand council and democratic processes were adopted almost without change by the original author of what became the Constitution of the USA, Benjamin Franklin, Thomas Jefferson’s mentor.

Can you tell me of anyone, scholar or laymen in the USA, or its acolytes internationally, who know this fact, that the supposedly barbaric American Indians were the very people whose method of governance was adopted and distorted to become the basis of the system of governance known today as American “democracy”?

The League of the Iroquois was composed of nation “states” which had jurisdiction over affairs of the “state” only. Each “state” had its own elected legislature, which, as in Franklin’s Constitution, chose a number of “electors” to the “federal” League of the Iroquois. These “electors” were accorded to each “state” based on the individual “states” population. The “electors” met regularly in the sacred hall for their deliberations. This “grand council” (the name Franklin used in the original draft of the Constitution for what came to be the Congress of the USA) was unicameral, as was Franklin’s original white settler “council”, later Congress, of the former British colonies.

This Grand Council of the League of the Iroquois declared war and negotiated peace treaties, sent and received ambassadors, decided on the new members joining the League and in general acted as a “federal” government whose decisions superseded those of the “states” in affairs of the “nation”.

The League of the Iroquois maintained a national state that stretched from New England to the Mississippi River that existed in conditions of internal peace for a thousand years or more.

Africans, like the American Indians, traditionally practiced a more consensual form of democracy, not a winners and losers system of divide and rule. The introduction of American “democracy” was critical to the success of neo colonialism in Africa and it’s implementation is responsible for most of the conflict and destruction wracking Africa today.

Western “democracy”, a system adopted by slave owners and redesigned to enable the preservation of a system of barbarism, maintained by force and violence, which has been forced on Africa, with this foreign infection subsequently proving to be critical in the continuing subjugation of the African continent by the western powers.

It’s all about controlling Africa with western “democracy” and like Cuba in Latin America, there is only one country on the African continent that rejects this system of exploitation, the small climate disaster wracked nation of Eritrea. Here in Eritrea we prefer to build our own system of “democracy” based on a peoples liberation war of 30 years and a culture of unity despite religious and ethnic differences that has withstood invasion, sanctions and climate disaster without faltering in our commitment to building a “Rich Eritrea without Rich Eritreans”, in other words Socialism. The west can have its so called “democracy” as far as we Eritreans are concerned.

Thomas C. Mountain is an independent journalist in Eritrea, living and reporting from the country since 2006. His work can be seen on his facebook page at thomascmountain or he can best be reached at thomascmountain at g mail dot com