It was once said that the British had an imperial empire so vast, “upon it, the sun never set.” Yes, but only because God would never trust the British in the dark. What are imperialism and empire? One of the best descriptions comes from James Flory, the protagonist in George Orwell’s semi-autobiographical first novel, Burmese Days (1934), who in an unusual chat-up line, tries to woo a young woman with his thoughts on imperialism. The woman asks, “what is imperialism?” In response, Flory quips, “imperialism is going to other people’s countries…killing them…and stealing their things.” Succinct and to the point.

Later on, Black revolutionary leader Malcolm X would tell us how imperialists sought to promote their alleged superiority by framing “Africa always in a negative light – jungles, savages, cannibals, nothing civilized.” Recall Lord Macaulay, a member of the British Supreme Council in India, asserting how “the whole native literature of India and Arabia is worth but a single European library shelf.” It was not enough to take their things. No, no. Imperialists also aimed to liquidate indigenous culture and silence the voice of the subjugated. Suppressing, silencing, and “linguistic subjugation is…an important strategy in implementing political subjugation” (Trudgill 1983: 152).

While the age of empires is supposedly confined to the pages of history, and the peoples of the South now have independence, do not be fooled. Imperialism and its structural framework (sexism, racism, hierarchy, exploitation, supremacy, etc.) remain pervasive. It’s clear in how so many countries have nominal independence, yet remain in-dependence. It’s clear in how Cecil was mourned, while nary a tear was shed for Ali Saad Dawabsheh. It’s in how Obama pompously lectured the benighted heathens in Africa, and applauded the corrupt local colonial administrators. It’s in how the NATO assault on Libya was to “save lives,” yet no one asks about how many lives it actually saved. It’s how the story of François Georges-Picot and Mark Sykes doesn’t only describe an event from 100 years ago, but also the activities of today’s powers who continue to draw maps outlining their nations’ spheres of control and domination.

Colonialism is also oozing from a recent tweet by Gianluca Mezzofiore, a reporter with the International Business Times, UK. Specifically, a reporter from Channel 4 News had tweeted a public call to Eritreans that pay the country’s unique 2% Rehabilitation and Recovery Tax, wanting to get in touch with Eritreans and hear their thoughts.

Without hesitation, Mezzofiore responds, volunteering to speak, and sharing his previous articles on the topic. Huh? Come again? Mezzofiore is not Eritrean. He does not pay the 2% tax. Someone please make him aware that, unlike colonial times, where Eritreans were oppressed by fascism and apartheid, Eritreans can now speak for themselves. They will no longer be silenced or spoken for. Thank you very much. Grazie. Yekenyelay. 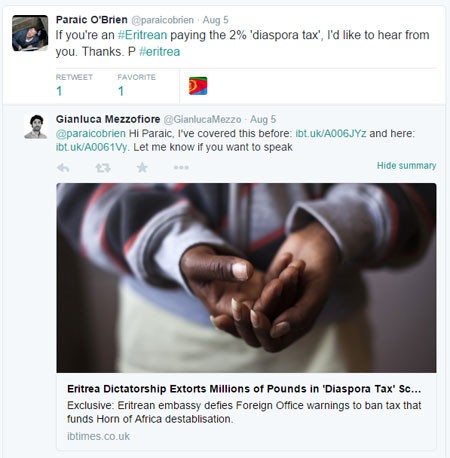 Moreover, in sharing his own previous work on the topic, Mezzofiore appears to attempt to portray some sort of preeminence and expertise on the subject. While certainly possible, it also reeks of the ethnocentric Western mentality that praises Western explorers as the glorious discoverers and liberators of far-off lands, disregarding the indigenous people who lived and thrived there for centuries. And one must not overlook how his work has promoted one solitary, myopic, clichéd, stereotyped discourse of Eritrea (and the 2% tax), pushed for regime change, and essentially neglected, suppressed, and silenced the voice and view of countless Eritreans. Recently, he was also at the center of a controversial story alleging plagiarism by Eritrean government officials, which was quickly debunked and displayed, in crystal clear view, Mezzofiore’s poor journalistic habits as well as the poor state of reporting and understanding about Eritrea by the mainstream media.

Colonialism and imperialism are not history, and Mezzofiore’s tweet is not trivial. We are still plagued by idea that peoples of the Global South must stay subservient, quiet, docile, and be spoken for, and there remains a deeply embedded notion (within academia, journalism, etc.) that any problem in any part of the world can or must be solved by Western countries and experts. Whether out in the open and blatantly obvious (a la Iraq, Libya, and Syria) or more subtle (as in Mezzofiore’s tweet and past work), this is just the continuation of a centuries-long phenomena based on exploitation, supremacy, suppression, racism, sexism, theft, and genocide…basically colonialism and imperialism.