Carol Pineau says, ‘In Eritrea, the Experts on Eritrea are Eritreans’

“The only experts are nationals of their own countries” – Weh Yeoh

Carol Pineau is an American journalist who has worked in Africa for many years representing the biggest news agencies of the world. Her first visit in Eritrea impacted her profession the most as she describes the Eritrean experience as a process of unlearning the ‘white savior responsibility’.

Her award-winning film, full-length documentary, was a ground breaking biopic that changed the African narrative. Carol Pineau says it all came from Eritrea. How come?

Correct. I reported 1999-2000 at the height of the border war. I was one of the two journalists who were living here. And, of course, with the difficulty of getting access in to Eritrea because all of the airlines had been shut down, it was very difficult for a journalist to come and so the story was being told almost entirely from the Ethiopian side.

Therefore, telling the Eritrean story is something that has been very important to me. It is a country that I entirely admire and I think there is so much that is not understood or even more misunderstood about it. Since leaving in 2000, I married an Eritrean and so the lessons of Eritrea I do continue to learn.

But like I always say, when I first came to Eritrea, I thought I was a big expert on Africa. I was a reporter in Nairobi and I covered the twelve East-African nations and I also had a radio program on Africa, for Africa. And then I came to Eritrea, and everything changed. In Eritrea, it is like they grab you by the shirt collar and say “don’t come here telling us what’s Africa. We will tell you what Africa is”. And I am so happy I’ve had that education; it completely changed the way I understood Africa.

I think we have a name for it now. We call it ‘white savior’. And I was definitely one. I thought that I loved Africa and that Africa is so lucky to have me. I realized I was wrong when I came here. Certainly, in Eritrea the experts on Eritrea are Eritreans.

Eritrea owns its own development and its own story. It doesn’t really happen in a lot of other countries. They don’t take charge the same way. But to me this is what it should be like and it is something that I really do admire.

We always talk about ‘African solutions’ and Eritrea’s got to be the purest example we may ever see. A pure African-led development. Rwanda is doing great, for example, but they have partners.

On the contrary, here in Eritrea, it is all being done by Africans and this is something the world should know. And it is not about taking a specific intervention that Eritrea did and then putting it in a different country but it is about the notion; yes, it can be done by Africans who knew and understand best the indigenous solutions, modernize them and collectively work towards social justice and development.

Q : Let me take you some twenty years back. What are your recollections when you first came to Eritrea?

I was a reporter and there was this crazy war that we couldn’t believe was happening. These two countries that had been so close after independence and then it was all about the Nakfa and ‘how dare that country introduce its own currency?!’ 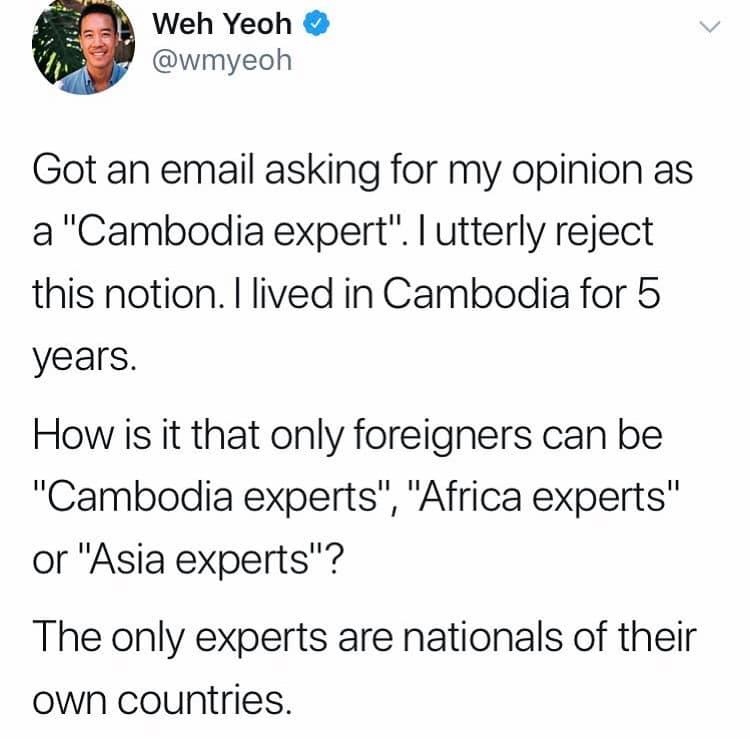 I arrived in Eritrea thinking I knew a whole lot about Africa. However, it became for me a process of ‘unlearning’ all the propaganda that I had been told. I was amazed by how open everybody was.

The airport had been bombed the day before I arrived in Asmara. No flights were coming in or out of Eritrea. Ethiopia said that it’d bomb anything out of the sky that would come close to Eritrea. We had this crazy pilot charter some eight or ten journalists from the biggest news agencies taking out from Nairobi and flying out over the ocean along the coast of Somalia because we couldn’t fly over either Ethiopia or Sudan. We landed in Eritrea with no flight plan whatsoever. And instead of being greeted with bombs and a big army, a man who worked at the airport came to us.

I remember walking around the airport looking for someone to issue our entry visa. Then we found one guy who started taking care of our visa. The visa was thirty-five dollars. I had two twenties and the guy looked confused. So I was like “oh yeah, this is Africa, you have to give him a hundred but he doesn’t have the change… but oh, it doesn’t matter, my office will understand that.”

So I gave him a hundred but the guy was like “No, no, I don’t have a change of five”. So I left my passport there with the conviction that the American embassy will give me another one; all that is with journalism is getting access. So I just wanted to get in. Couple of hours later, I was at the Sunshine Hotel and I had my passport delivered to me with five dollars and a receipt for the thirty five dollars. And that was my first introduction to Eritrea!

Q : You do mention on different occasions that there are lessons you took from Eritrea.

I should say that the lessons of Eritrea continued for me even after I left. In part because I have home- schooling from my husband but also because my experiences here were so poignant for me. When I left Eritrea, I didn’t want to tell the same story I had been telling about Africa. I did a film called “Africa open for business” and this was in 2005. I thought no one would be interested in that because it was business and it was Africa. It ended up being voted the BBC documentary of the year.

No one had ever seen Africans being perfectly normal. The story was about ten entrepreneurs throughout Africa, telling how they dealt with their businesses. And that it just never had been seen. From that, as a western journalist, I had the chance of saying that we’re telling a lie by our mission and that we are biased. That’s how everyone else started writing stories about businesses in Africa. Many of them not quoting my film but all of them talking about the same businesses in my film. In 2005 this was pretty revolutionary in media and it all came from my lessons in Eritrea!

Q : If you were to speak about the regional situation, now twenty years after you first landed in the Eritrean capital, what would be your views on the developments in the Horn?

I do not know of any other country that would finally get peace and then think of others. I cannot believe that two seconds after having peace the Eritrean Government said ‘okay, it should really be about the Horn of Africa.’

I was here last year two weeks before the first envoy, Mr. Yemane Ghebreab and Minister Osman Saleh, went to Ethiopia and I think I didn’t have enough imagination where this would go. I was as surprised as everyone else.

However, Eritrea had ended the war eighteen years ago. This should have been over with the final and binding agreement. But it went on and on, in part because of Ethiopia and also because the international community allowed it, but never did Eritrea didn’t agree for peace. Eritrea had done its part and was waiting for the rest to do their part. More than anything what is remarkable is that Eritrea has seen the peace process in a selfless way.

Q : I understand that you are now working on a new project. What are you doing here and what is your aim?

When I came back last year, I really wanted to dove into the issue of Eritrean development. I think that the world should know. I really wanted to go work on something longer — a book or a film version about that. And in the meantime, then, I was introduced to a woman that started at George Mason University the center for narrative and conflict resolution. Together, we ended up doing what maybe the first opening moment of a study abroad in Eritrea. We ended up getting eleven students to come to Eritrea.

We gave them required readings: pieces on the National Development plans and things of the sort about Eritrea but we also gave them the human rights watch and things like that. We didn’t want anyone blindsided and later be accused of having kept some things from them. We had different sessions beforehand, we had experts on development talking to us and by then they all had Googled Eritrea and had seen both the positive and negative things written about Eritrea but they still wanted to come.

It has been an amazing experience both for the students and me. They had some reservations before coming but still they were here and they couldn’t just believe it. Everyone here has been so on board, from government officials to villagers. One of the students was Ethiopian and everyone was calling him “brother”; he was unprepared for that. He found it very emotional. One military General in Adi Quala, for example, was telling us about the war and about how the Ethiopian troops came to attack but he kept referring to our Ethiopian student as his brother.

He and I were standing there at that hill side of Adi Quala and I told him of the press conference when President Isaias once said, to the delight of the journalists, “war is bullshit”.

This last visit has been incredibly moving. We went to most of the developmental sites of Eritrea. Then we also took part in the official ceremony for the Martyr’s Day. We saw people laying flowers on the graves of their dead because, for Eritreans, it is their day to be with their families. We also went to the tank graveyard and sat on the ground and had a discussion within the group surrounded by all the armament around us thinking really, again, “war is bullshit” and that discussion was really moving to the students.

The students left on the 22nd but then I continued delving deeper in to the project looking into developmental aspects of the country particularly that of health. I was especially fascinated by the Mendefera Hospital and the fistula program because it incorporates so much. It is not just about operating women but about sending them home with a vocation, some education and more. The Eritrean development reflects the long term and integrated thinking that Eritrea does so well.

I am now going back home with a month-long footage and experiences that I have to craft it to what I really want to say in a book or a film version of it.

Thank you so much for your time and I am really looking forward to your book. Good luck!