Breaking the Stalemate in the Egypt-Ethiopia Dam Dispute

BY BARAK BARIF | THE WASHINGTON INSTITUTE

On July 26, the chief engineer of the Grand Ethiopian Renaissance Dam, Simegnew Bekele, died under mysterious circumstances. Two days earlier, Prime Minister Abiy Ahmed revealed that the project could take another ten years to complete, even though the self-financed dam has already strained the impoverished country’s fragile economy.

The silver lining behind the project’s growing uncertainties is that they give Egypt a much-needed respite to devise a better water conservation strategy.

Egyptians are horrified at the effects the dam will have on their water supplies due to a temporary reduction in the Nile River’s flow.

Their country has the lowest precipitation on earth and reportedly relies on the Nile for more than 75% of its water, so they believe any drastic decrease could be catastrophic.

In 2017, President Abdul Fattah al-Sisi declared that “no one can touch Egypt’s water,” calling it “a matter of life or death.”

Washington needs to work with both countries to ensure they reach an equitable solution that does not further destabilize Egypt.

Doing so will require a closer look at the political and economic factors that spurred the project and contributed to its delays.

From Ambition to Stalemate

Ethiopia laid the dam’s cornerstone in April 2011. To ensure that foreign donors and international organizations could not delay it, the government self-financed the approximately $4 billion project, raising funds from local banks and deducting money from civil servants’ salaries for bond purchases.

Once completed, the project will create the seventh-largest dam reservoir in the world, more than twice the size of the Hoover’s (74 billion cubic meters vs. 35.2) and generating almost three times as much electricity (6,000 megawatts vs. 2,080).

Ethiopia plans to use it for power generation rather than for irrigation purposes, selling below-market energy to its neighbors.

Yet the dam will reduce Egypt’s water supplies during the multi-year process of filling the reservoir, significantly affecting the country’s agricultural industry. For example, Cairo has argued that a 1 bcm decrease in the national water supply would cause 200,000 Egyptians to lose their jobs.

After the 2013 military takeover, Sisi quickly stabilized the country while devising a coherent negotiating strategy regarding the dam. Yet five years of talks have yielded little to no progress on resolving the main issues, with officials reduced to fruitless debates over meaningless technical studies conducted by European consulting firms.

Ethiopia has been touted as an African success story, experiencing several years of growth exceeding 10%. Foreign direct investment skyrocketed from $365 million in fiscal year 2005/6 to $4.2 billion by the end of 2017/18. 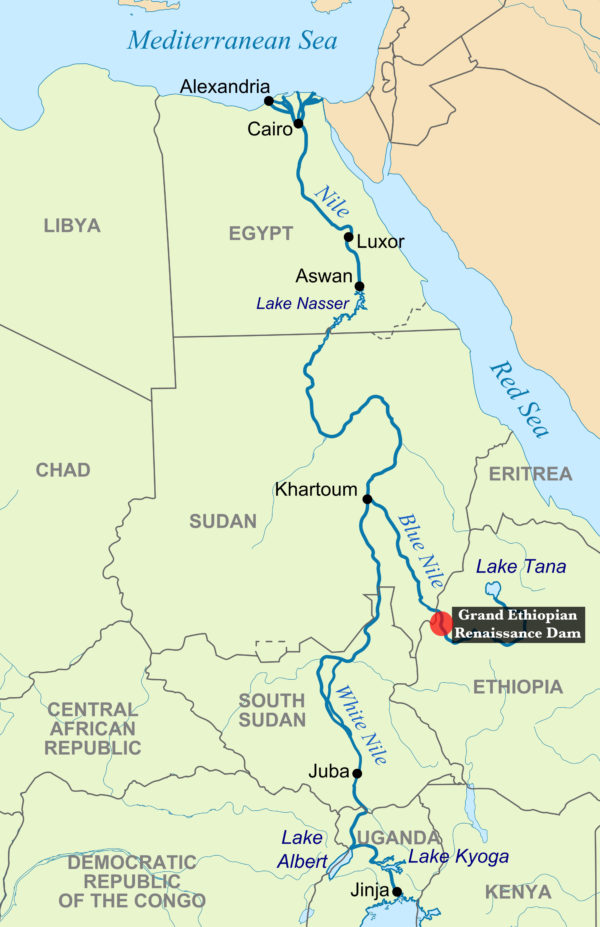 In December 2017, the country’s reserves barely covered two months’ worth of imports, the minimum recommended by the IMF.

The foreign currency shortfalls have spawned economic challenges that Ethiopia cannot solve on its own, so it has looked to foreign patrons for assistance, particularly Beijing. In 2016, China was the largest purchaser of Ethiopian goods (12.5%) and its largest import partner (31.6%, nearly four times more than any other country). It is also the largest foreign investor, accounting for around 25% of Ethiopia’s 5,217 direct investment projects. Yet Beijing is the country’s largest creditor as well—from FY 2012/13 to 2015/16 it provided $4.6 billion, or 29.5% of all of Ethiopia’s loans. This included $1.2 billion to fund a transmission line for the dam.

Other patrons have helped as well. Ethiopia has asked Saudi Arabia for a year’s supply of fuel with payment deferred, while the United Arab Emirates promised $3 billion in aid this June, immediately depositing $1 billion in the central bank. Both countries are also important trading partners, becoming the fourth- and ninth-largest purchasers of Ethiopian goods (6.7% and 3.3% respectively) in 2016. And earlier this month, Prime Minister Abiy revealed that the World Bank would provide $1 billion for the budget.

The drop in foreign currency has strained the dam project, leaving Ethiopia unable to pay suppliers. As a result, Salini Impreglio—the Italian company tasked with building the dam—is believed to have slowed the pace of construction.

Yet the project has been plagued by avoidable non-economic problems as well.

To conserve foreign currency and give its engineers valuable public works experience, Ethiopia allocated a large share of the project to local firms. In a July 31 article for Ethiopia Insight, however, William Davidson noted that the domestic Metals and Engineering Corporation [METEC] lacks the capacity to perform its assigned task, failing to install even one of the dam’s sixteen turbines and thereby delaying Salini’s electromechanical work.

According to the Salini website, the project was slated to wrap up in May 2017, but it is only around 65% done. Even this figure is misleading because the bulk of the completed tasks fell within the relatively easy earthwork phase; the more complex turbine installation and powerhouse labor remain.

Corruption may also have played a role in the project’s postponement—and perhaps in Bekele’s death. The day he died, he was slated to provide an update on the delays, possibly naming individuals who have illicitly benefited from the project.

Another suspicious death occurred in May, when Deep Kamra—an executive from Dangote, the Nigerian company supplying the dam’s cement—was killed while visiting a restive region of Ethiopia.

Such factors may explain why the prime minister sought to temper expectations about the dam last month. His ten-year completion estimate likely alluded to both completing the dam itself (projected to take another three years) and filling the reservoir (probably seven years, but see below for more on this matter).

His comments also shed light on the government’s new priorities. Once a point of national pride symbolizing autarky and regional importance, the dam has been shunted to the side as Abiy focuses on the peace process with Eritrea and domestic reforms. His freewheeling policies threaten the vested interests of the Tigrayan People’s Liberation Front [TPLF], which has long dominated the authoritarian country and may have been involved in a June 23 assassination attempt against him.

Egypt can use Abiy’s changing priorities and the turmoil surrounding Bekele’s death as an opportunity to devise a new water strategy, but it will likely need U.S. diplomatic muscle to carry it out. A good first step is to document exactly how much water the country actually needs to draw from the Nile.

The government’s Central Agency for Public Mobilization and Statistics noted that Egypt consumed 76.3 bcm of water in FY 2015/16, a figure that includes non-Nile sources. Under a 1959 agreement with Sudan, it is apportioned 55 bcm annually from the river. Yet the Sudanese do not use their entire allotment, so international experts believe Egypt currently draws up to 65 bcm.

As for the dam’s effects, the Nile’s flow will fall drastically during the reservoir’s filling period, forcing Egypt to make up for these annual losses. Thus far, the government plans to increase desalinization fivefold over the next three years, while the prime minister noted in 2016 that Cairo would increase efforts to recycle sewage water and line canals. It has also begun enforcing restrictions on planting water-intensive commodities like rice while encouraging the consumption of grains such as quinoa, which require less water. Such measures are a good start, but they will only save about 5-7 bcm of water per year—not enough to offset the reservoir’s filling period.

While Egypt and Ethiopia have a good relationship and are trying to find a solution amicably, they have not made much headway. The biggest remaining issue this late in the dam’s construction is the reservoir filling period.

Egypt would like to prolong it as much as possible to lessen the annual decrease in Nile water supplies, with local media pushing for seven to ten years. Before his death, however, Bekele projected completing it in five to six.

To break the stalemate, Washington should urge both sides to accept a seven-year filling period, balancing Ethiopia’s need to produce speedy returns on its investment with the damage an accelerated timetable could cause to Egypt.

U.S. officials could also help arrange an international aid package of water-intensive crops such as alfalfa, garlic, and henna, allowing Egypt to preserve precious resources. The dam is a worthwhile project that will provide cheaper electricity to some of the world’s most impoverished nations, but their gains should not come at the expense of destitute Egyptian farmers and the stability of the world’s most populous Arab state.

Barak Barfi is a research fellow at New America, specializing in Arab and Islamic affairs.