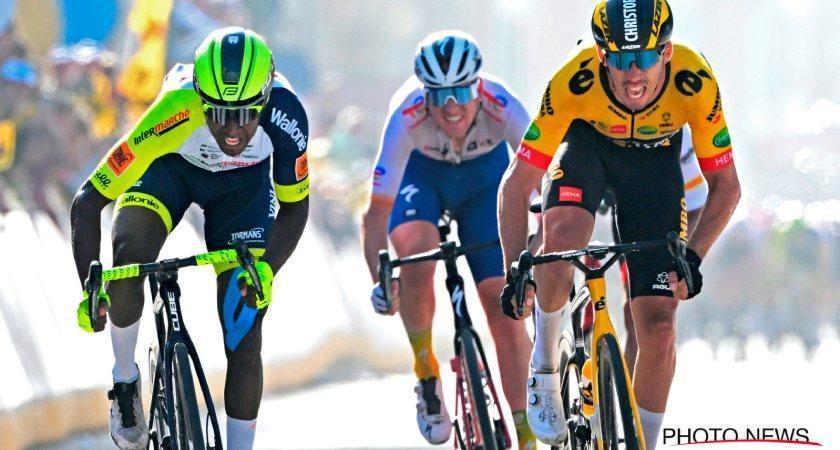 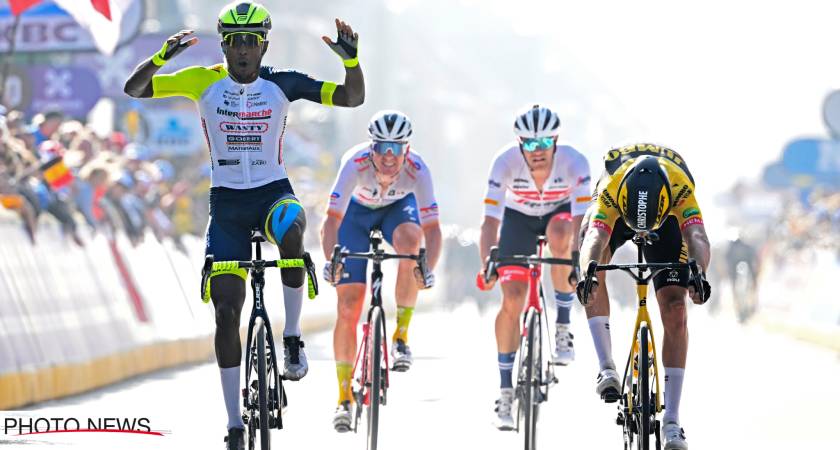 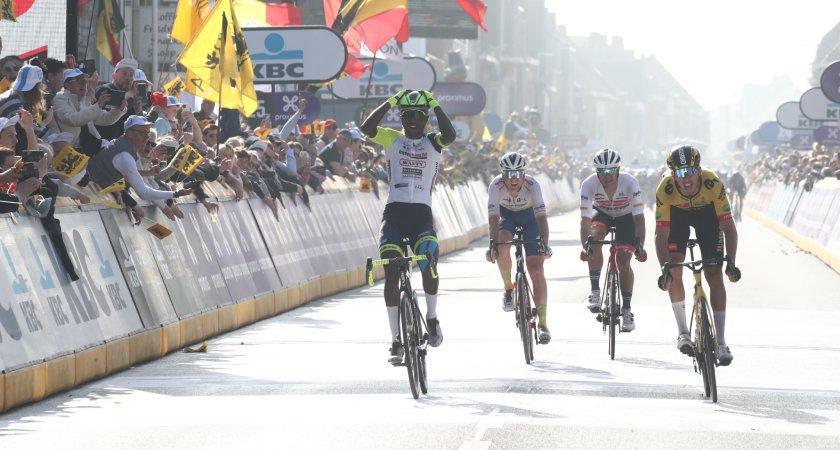 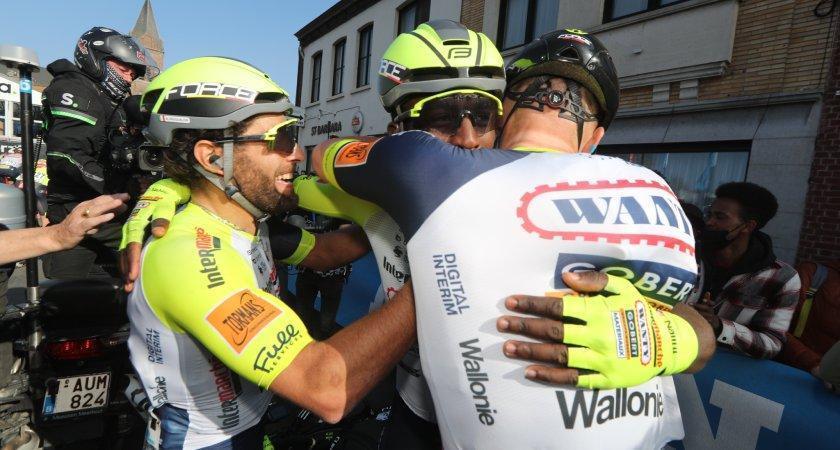 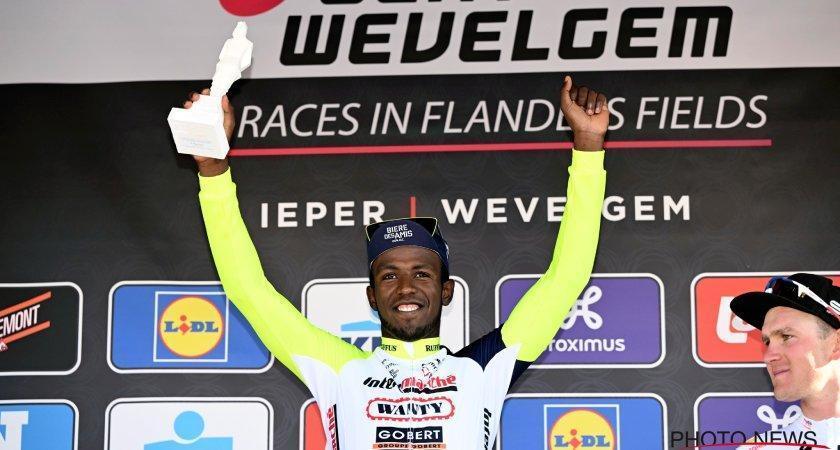 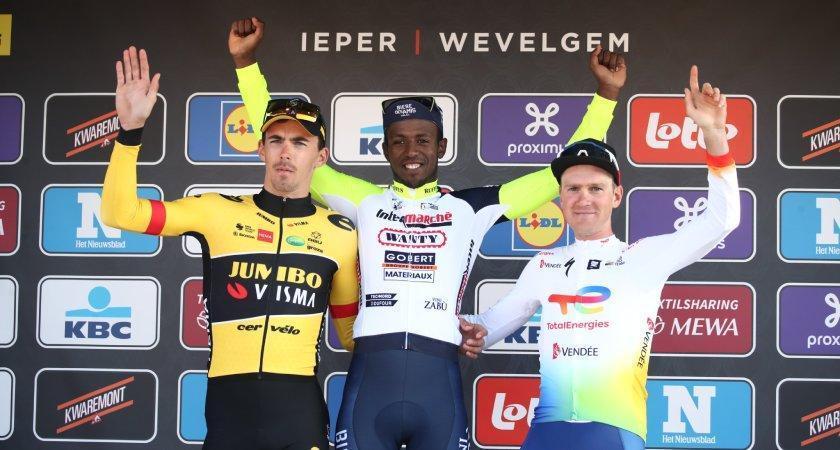 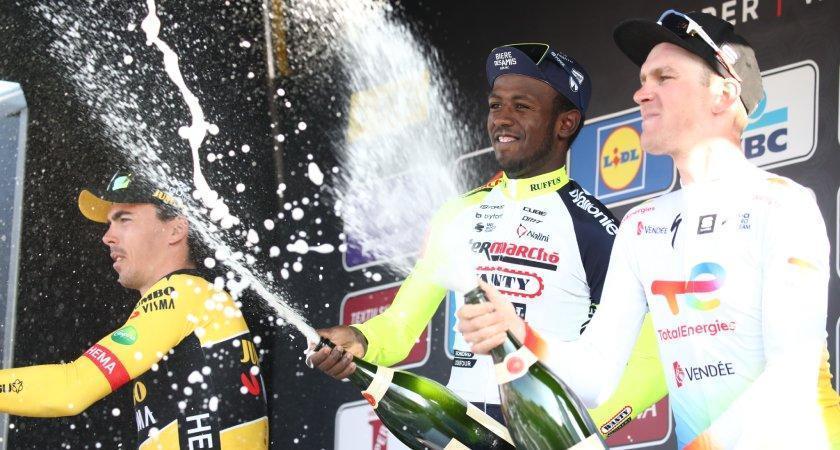 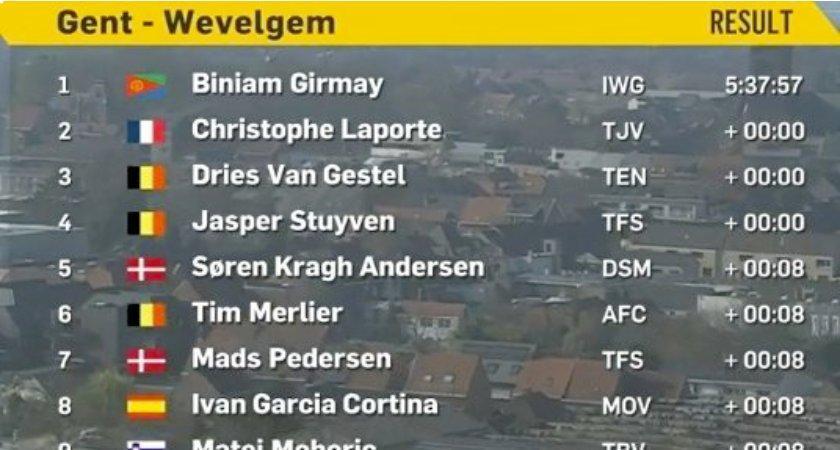 Biniam Girmay (Intermarché-Wanty-Gobert Matériaux) made history at Gent-Wevelgem, the Eritrean taking the win by outsprinting Christophe Laporte (Jumbo-Visma) in the final 250 metres of the cobbled Classic for the biggest win of his young career.

The 21-year-old was part of the four-man group that stole away on the flat run to the finish after the final ascent of the cobbled Kemmelberg. The quartet held off a spirited chase from behind to contest the sprint, with Dries van Gestel (TotalEnergies) taking third ahead of Jasper Stuyven (Trek-Segafredo).

His first win at WorldTour level, Girmay explained in a post-race interview that he was not meant to ride the 248.8km Classic but was drafted in on Friday after his performance at E3, leaving him in a greater shock that he was able to claim the victory.

“It’s unbelievable, amazing. I cannot expect this,” Girmay said. “We just changed my plan a few days ago on Friday. We just came for a good result. This race is amazing. Unbelievable.”

On the final sprint, Girmay said he had grown in confidence during the race having struggled initially on the cobbled sectors, but managed to stay in touch as he recognized all eyes from his competitors would be on defending champion Wout van Aert (Jumbo-Visma) on the crucial ascents of the Kemmelberg.

“Of course I feel much better, but also there’s really strong guys with me so I’m a bit afraid,” Girmay said on making it into the decisive group. “But I felt confident in the last 250m. It’s unbelievable.

History made. 21-year-old Biniam Girmay from Eritrea is the first African winner of a Belgian classic, taking victory at Gent-Wevelgem for Intermarché Wanty Gobert ahead of Christophe Laporte of Jumbo-Visma. #GentWevelgem pic.twitter.com/lBIHVGk0KQ

It was a close-run thing at the line as Girmay launched his final dash very early with 250 metres to go – a huge distance for a finishing sprint – but the Eritrean held off Laporte to claim the win.

Asked whether the Gent-Wevelgem victory would convince him to ride the Tour of Flanders next Sunday, Girmay said he would return home, having not seen his wife and daughter for three months while racing in Europe. He also acknowledged what his victory could mean for African cycling going forward.

For at least a decade we've been waiting for an African rider who could rise to the top of World Tour racing. With Biniam Girmay, a 21 year old from Eritrea, I think it's safe bet to say the future has arrived. pic.twitter.com/Jhw9f09Ld1

“It changes a lot in the future, especially for all African riders,” he said.

Girmay is next scheduled to ride the one-day Eschborn-Frankfurt in May after a period of rest, before taking on his first Grand Tour at the Giro d’Italia later that month.

* Cycling Weekly and Cycling News contributed to the story