Beyond Refugee Crisis and Human Tracking Perspectives for the Youth 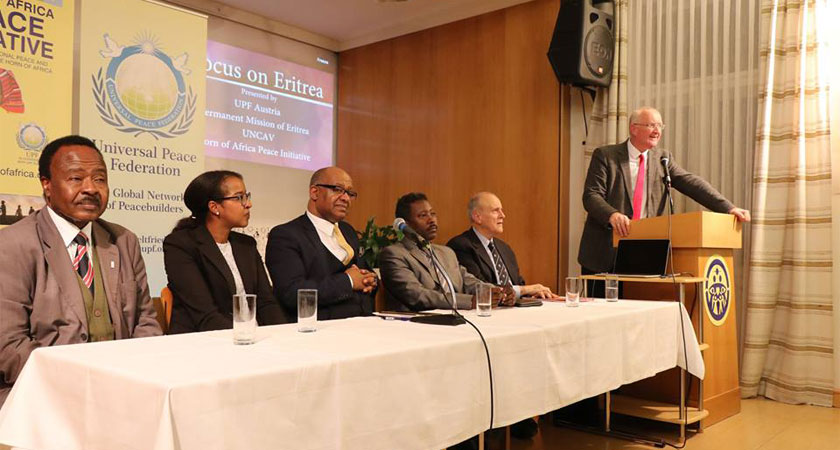 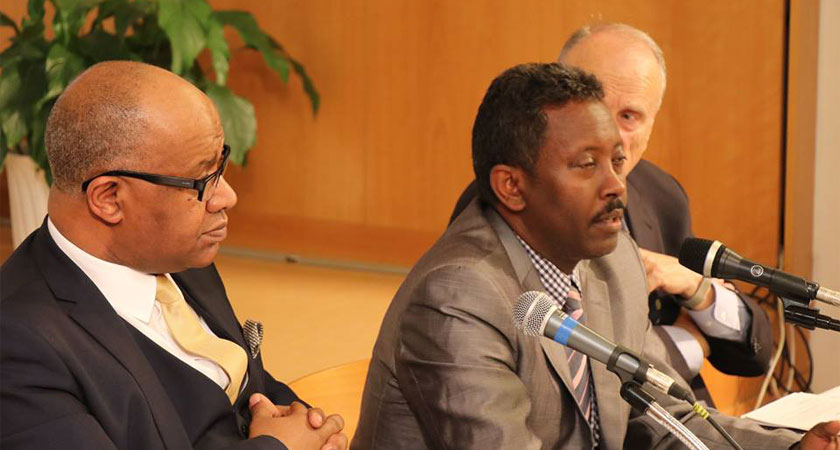 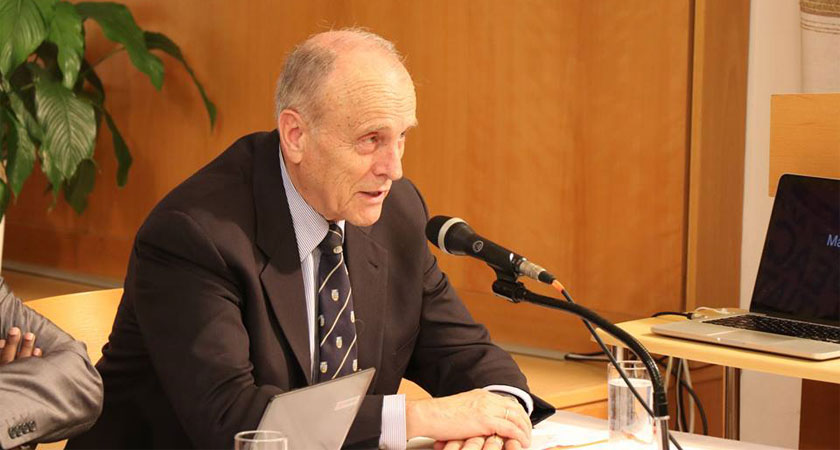 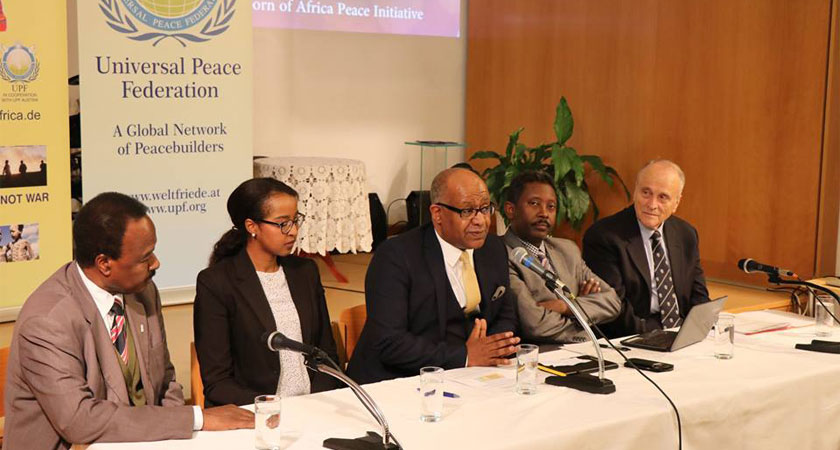 Universal Peace Federation (UPF) Austria, in collaboration with the Permanent Mission of the State of Eritrea to the United Nations in Vienna, UNCAV – United Nations Correspondents Association and the Horn of Africa Peace Initiative, hosted a panel discussion on the 3rd of November 2017 themed “Beyond Refugee Crisis and Human Tracking Perspectives for the Youth in the Horn of Africa with a special Focus on Eritrea“.

The aim of the panel discussion was to reflect the untold story and share the views and experience of the horn of Africa on human rights in relation to the recent phenomenon of migration.

The discussion was opened by the President of the hosting organization Dr. Peter Haider. He welcomed the guests and gave a brief introduction on the general objectives of the event.

Dr. Haider said, his organization has hosted a number of events but the present one is unique in its content and focus. He then thanked Mr. Abdelkadir Hamdan for his efforts to make this happen.

After the opening remarks, the audience were given the opportunity to see a short video on the achievements of the Government of Eritrea in laying down the basic fundamental infrastructure.

The moderator of the event, Mr. Yared Tesfay, Media & Communication Officer of the Embassy of the State of Eritrea to UK & Ireland, thanked attendance for coming and expressed his hope that the forum will broach the issue of migration and youth.

He also expressed his confidence that the event will contribute to creating an alternative perspective in addressing the issue of Europe refugee crises and migration.

The Key note speaker of the event Mr. Adem Osman, 1st Secretary, Charge de’affaires a.i. of the Embassy and Permanent Mission of the State of Eritrea to the UN and other international organizations in Geneva, based his presentation on the general application of human rights law, the mechanisms put in place to promote and protect human rights with particular focus on the conduct of business of the UNHRC and the mandates of the special procedure.

He stated in his presentation that there is strong need to look at the history of the horn in order to have a sober analysis of the present and the future opportunities and challenges. On that note, he emphasized that the coastal states of the horn have become victim of their own location that gives them full control over one of the world’s main maritime trade roots.

Among other arguments, Mr. Adem substantiated his argument by the fact that the two diametrically opposite views of the West and East blocks were compelled to be served by one agent (Mengistu Hailemariam) proves nothing but the magnitude of the interests that the superpowers have.

According to him, the strong interests of the superpowers that benefited from a regime derived by a blind desire to get access to the Red Sea in return of any demand have negated the people of Eritrea the bold right to self-determination that was restored in 1993 by a popular UN backed referendum.

Pursuant to the presentation, the price tag of negation of the self-determination was the loss of 65,000 martyrs, and 10,000 persons with permanent disability and unimaginable lost opportunities.

He underscored, that Eritrea is the product of such struggle and will continue to put the necessary infrastructure in its social justice driven developmental programs. However, according to him, the full enjoyment of human rights needs robust economic development and stability. Whenever, these are threatened, states tend to introduce varying degree of security measures.

In this connection, he argues that there are different standards to different situations without necessarily putting any hierarchy. The real measurement is, therefore, whether a state is heading to the right direction or not.

On the issue of trafficking and smuggling, the key note speaker, said that there exists no human trafficking inside Eritrea as there is strong and effective government. However, he said smuggled people may end up trafficked in the course of their dangerous journey in countries of transit.

Speaking on the migration issue, he said, Eritreans were driven by strong pull factor facilitated by a networks operating from mostly the camps in Ethiopia and some of them operating in countries of destination. He further said that the number of Eritreans fleeing the country is at its lowest now.

He also called upon the world community to shoulder its responsibility to pressure on Ethiopia to evacuate the territories of Eritrea in accordance to the final and binding ruling that could ultimately be helpful in the relations of the countries towards a better harmonized horn. He also highlighted the economic growth and the possibilities for investors. He then responded to a range of questions posed by participants.

Dr. Walter Lichem, who was former Austrian Ambassador to Chile and Canada who also served as head of the department of international organizations, spoke on his decade’s long interests about Eritrea touching on the geopolitics surrounding many issues.

He focused on the cohesiveness of the Eritrean society and the resources. He advised Eritrea to benefit from its cohesiveness and proposed to establish human rights cities to combat accusations. He shared his view that Eritrea is in the right path that needs time and space. He also spoke on the failure of the international community to enforce the final and binding ruling the EEBC.

Dr. Abdallah Sharief, President of United Nations Correspondents Association (UNCAV) and co-founder of the Horn of Africa Peace Initiative, who is from Sudan, shared his personal experience on migration when he came from Sudan in the early 70s. He also gave some facts and figures on migration and youth.

A young University student, Ms. Fartun Osman from Somalia also shared her personal experience and told audience that the situation in her country is now promising.

Finally, participants who were given a sector to pose their questions expressed their satisfaction. They said that the forum has enlightened them of the situation and challenges that the horn continues to face and requested that such events be repeated in the future.

In his closing remarks, Dr. Peter Haider, stressed the importance of the forum in bringing together the stakeholders from all fields to address and share their experience, as well as reflect the reality in Eritrea and the Horn of Africa and explore further opportunities.

The event was followed by a dinner that was prepared by the Eritrean community in Vienna that also created an opportunity to further informal discussions.