Fake News, The BBC and Eritrea

Sometime in April of 2017, the BBC’s Editorial Complaints Unit published its findings about a complaint made about an article on Eritrea. On the face of it, it would appear that the BBC had done the right and honourable thing by acknowledging a mistake it made. After all, this is the BBC where we are told in the BBC’s Complaint Framework Document that, complaints were very important and would be dealt with as quickly as possible.

However, in my experience the reality is far different. I have found out that the BBC is an organisation that cares little for its own Charter and in pursuing an anti-Eritrea agenda (constantly denied by those at the BBC) it is willing to admit that, emails get lost, not once but twice and that its writers have a worrying habit of unwittingly conflating stories.

(‘unwittingly’ is defined as without being aware; unintentionally and conflate is defined as, combing two or more sets of information, texts, ideas, etc. into one.)

How a supposedly professional journalist, bound by the editorial standards of the BBC, can ‘unwittingly conflate’ two unrelated stories is beyond me.

On 9 September 2016, the BBC published a story of what they claimed was an account of the experiences of an Eritrean refugee that had made his way to the UK from Eritrea. Like other typical articles on Eritrea, this article resorted to exaggeration and outright lying (later euphemistically referred to, as ‘unwitting conflation’).

As I read the article, it was abundantly clear that it was just another attempt by the BBC to smear Eritrea.

Although it was clear that the content of the article deviated from the truth, it was quite difficult to prove this conclusively, as it was written as the personal account of ‘Marvin’, the Eritrean boy featured in the article.

For example, the article mentions that ‘Marvin’ managed to escape the Eritrean authorities that were searching his house by hiding behind the door. For anyone with a modicum of common sense, this would appear preposterous, but I knew the BBC would use its usual excuse of ‘it’s a personal experience’ to justify itself.

I was able to identify several inconsistencies that I felt would highlight the rather poorly compiled report by the BBC. They are as follows:

I registered my complaint on 11 September 2016 and the BBC responded on 17 September 2016. In its response the BBC basically told me to mind my own business when it stated,

As the title suggests, this is Marvin’s story in which he shares his own experiences and feelings. He’s not obliged to reveal to readers how exactly he found out about things that happened back in his home country.

Obviously the response of the BBC was just a pathetic attempt at a cover up. I, therefore, made a second complaint on 19 September 2016. In my second complaint, I pressed the BBC to provide evidence of the Eritrean government burning villages and an explanation as to how a lonely boy travelling in Europe can hear about this event.

The matter should have taken four weeks but the BBC responded on 1 December 2016, 10 weeks later. No reason for the delay was given and the response they gave was not much different to their previous one and what little extra detail it had, certainly did not justify the extra six weeks it took in providing a response.

In its second response, the BBC acknowledged that ‘Marvin’ was following a well established route across Europe and not as they had first claimed had travelled all alone across Europe. With regards to the burning of villages, they said that,

The article mentions that he meets up with friends from his hometown on his journey through Europe. It is therefore plausible that one of them may have had some contact with his hometown.

At this point, I knew that the BBC was clutching at straws to justify their claim. One would think/hope that those employed at the BBC would be of a sufficiently high enough calibre to identify irregularities within their own article. Had they actually read their own article, they would have realised that the people they said could have informed ‘Marvin’ of the burning of his village had reportedly died in the Sahara and ‘Marvin’ only heard the news when he got to Europe. It was, therefore, impossible for them to convey the news, which still leaves the question of how did he knew about an event in Eritrea which had never been reported on, unanswered. As I read the BBC’s response, it was clear they were weaving a tangled web as they had already started to deceive.

So naturally, I escalated the matter to the BBC Editorial Complaints Unit (ECU), pointing out the inconsistencies within the article and the contradictory response of the BBC. The ECU’s response was delayed due to the BBC Trust being abolished and OFCOM taking over responsibility from the Trust.

When the ECU’s response finally came through, I did not know whether to laugh or be infuriated. In its response the ECU stated,

We have looked into the claim that his home village had been burned to the ground and have established this did not happen to “Marvin”. The person writing this piece unwittingly conflated a description of the experiences of a Sudanese boy with what had happened to “Marvin”. The article did not meet the BBC’s standards regarding accuracy and we are therefore upholding your complaint.

To me, the response of the ECU highlights the shortcomings of the BBC and shines a light on its anti-Eritrea propaganda campaign. The BBC had ample opportunity to acknowledge that a mistake had been made. However it chose not to do so.

There can be no doubt in my mind, that despite the ECU saying that the author had ‘unwittingly conflated a description of the experiences of a Sudanese boy with what had happened to ‘Marvin’, this was a deliberate attempt in trying to portray the Eritrean government in the worst possible light and resorting to pure and simple lies in order to do this.

The author was not interviewing the South Sudanese boy and ‘Marvin’ at the same time, therefore, how can he unwittingly conflate their experiences?

Furthermore, the article was supposed to have been based on an account given by ‘Marvin’ in an interview with the author, so why then does the author need to ‘pad out’ his story with that of the South Sudanese boy’s experience? To me, it would appear that ‘Marvin’ was simply a figment of the imagination of the author and the purpose of the article was to provide the BBC with an opportunity to regurgitate untrue, unfounded and unsubstantiated statements about Eritrea.

Unfortunately for the BBC, this time round they simply could not get their story straight and seem to have shown a light on the inner workings of the propaganda machine that is the BBC, which is funded by the license fee paying British public but not necessarily working for its interests. 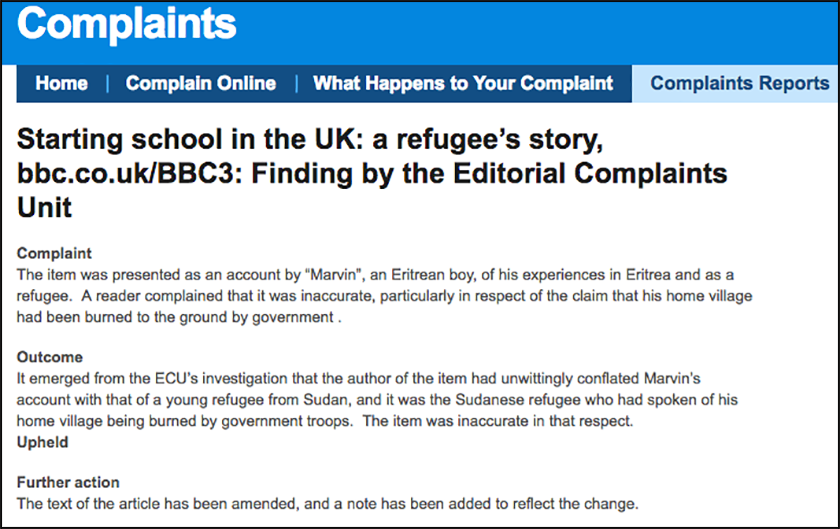