Manufacturing pharmaceuticals in Eritrea dates back to the armed struggle. Lack of medicine for freedom fighters triggered pharmacists to come up with the idea of manufacturing medicine within the field. Manufacturing infusion started in 1983 which was initially meant to heal wounded fighters and thereby minimize martyrdom.

Availability of medicine raised the morale of the freedom fighters. Later, manufacturing of anti-biotics, capsules, and other drugs began to combat diseases such as Malaria. The production continued until independence and greatly helped communities who lived in liberated areas. Settled and nomadic people were supplied with basic medicine. Many lives which could have been lost due to the shortage of medicine were saved. This particular period was a step forward for the development of the medical industry in Eritrea.

To widen this major success, modernize it and comply with international health standards, AZEL Pharmaceutical Manufacturing Plant was built in keren in 2003.

AZEL was established as a joint venture between the Ministry of Health and a Jordanian Pharmaceutical Company JPM. The mission of the company is to manufacture, distribute and, sell high-quality pharmaceuticals at a competitive price in a widening market by keeping up with current quality standards and regulatory requirements; adopting modern technology and, conducting research.

AZEL is currently engaged in the development and formulation of brand-generic pharmaceuticals designed to fight some of the most serious diseases in Eritrea. The company is committed to helping people lead healthier lives by manufacturing and marketing quality medicine. AZEL operates through four departments: Production, Supply Chain, Quality Control and Human Resources Department.

Mr. Misghna Tekleab, the General Manager of AZEL said that the establishment of the company has two advantages: to boost health standards as well as develop the pharmaceutical industry in the country. He further said that having a quality medicine that people can afford is an example of modern health service provision.

Medicine manufacturing can help reach outpatients immediately in emergency times and avoid being a victim of the counterfeit medicines imported from the world market. Medicine production is a value-adding task since every step in and outside the plant adds value to the product. 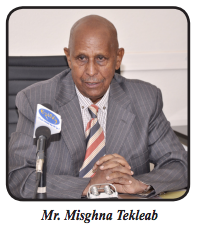 Countries use their competitive advantage to import or produce medicines that they need. In Eritrea, up to 1200 medicines are shortlisted as relevant by MoH. Fifty types of medicine, which are the most important, are produced in AZEL. This particular medicines have high demands and are produced on regular basis. AZEL claims these medicines are produced in a good quality and are affordable in price.

The production department has a capacity of producing 90,000 capsules per hour and annually it produces over 200 million capsules, 50 million batches of capsules, three million ORS, one million liquid medicines.

At the moment, AZEL meets 40% of the national medicine demand and looks forward to producing more. It has been producing for local consumption but there are plans for exports when its supplies exceed demands of the local market.

Two unique, scientifically developed documents are used to manufacture medicine in AZEL. The documents relate to the Manufacturing Formulations as well as to the Processing and Packaging Instructions. Like other pharmaceutical companies in the world, AZEL follows universally accepted Good Manufacturing Practice (GPM) guidelines to produce and distribute quality medicine. AZEL makes sure that quality raw materials are imported and suppliers’ are rated.

The company depends on the JPM to transfer most of the technical know-how to its employees. When the company was in its infancy about 11 of its employees were sent to Jordan to be trained on how such plants operate. By now, almost all employees of the company are Eritreans operating the sophisticated technologies available for production. Pharmaceutical technology gets updated annually and the medicines are equally upgraded to fight diseases efficiently. Besides this, employees’ know-how is regularly enhanced with the assistance of shareholders.

The company regularly strives to recruit potentially skilled and enthusiastic personnel as the production of medicine is sensitive. There are 229 employees, 60% of whom are female. Periodic training workshops are given to all employees and newly recruited employees are given the GMP as an induction. To enable its employees to develop professionally, AZEL has hired SMAP Institute to give training courses in Keren. 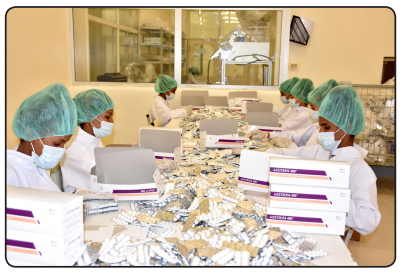 Further, it is sponsoring some of its staff who are taking distance education leading to Master’s degree in Business Administration and Clinical Pharmacy. On the job training is also provided by the company. AZEL employees believe that the company is a gateway to a bigger experience. There are good knowledge transfer and synergy witnessed in the company. Employees highly value the delivery of quality in terms of hygiene, safety and, effectiveness.

Employee motivation is one of the key points the company focuses on. All employees are insured for their personal safety and are provided with health services.

Moreover, there is a 7% provident fund saved from their salaries and an additional 5% from the company’s income for retirement. Kindergarten is available for children of mothers who work in the company. This created relief for the mothers and, as a result, work is done without any interruptions. As some of the employees come from Asmara, transportation services are given by the company every weekend.

AZEL Pharmaceutical Share Company’s long-term plan is to annually meet the shortlisted medicines of MoH that are relevant to Eritrea. The company also looks forward to increasing its quantity of production and strengthen the inspection program by bringing foreign experts to deliver the best of medicines to the public.