“Those who foolishly sought power by riding the back of the tiger ended up inside” – John F. Kennedy

When Hailemariam Desalegn resigned as Ethiopian prime minister on Thursday following almost three years of deadly anti-government protests, he said he did it to be “part of the solution” to meet the public’s demands for “development, democracy, and good governance”.

But in a sign of how the authoritarian, Marxist-rooted regime is struggling to contain the greatest threat to its authority since taking power 26 years ago, the following day it imposed a six-month state of emergency rather than reiterate its commitment to reform.

Siraj Fegessa, the defence minister, said the restrictions would last for six months to subdue “pockets of areas where violence is prevalent”.

Protests and media that incite violence would be banned but he said the move was not the prelude to a military takeover or a transitional government. He did not discuss when a new prime minister might be appointed.

However, many analysts regard it is a desperate move by an unpopular government that has failed to fill the leadership void left by the death in 2012 of Meles Zenawi — the charismatic leader who dominated the regime for two decades and is now struggling to rein in rising discontent among an increasingly well-educated but frustrated population.

Hassan Hussein, an Ethiopian political analyst at St. Mary’s University in Minneapolis in the US, says events in Ethiopia now “feel like a revolution against a regime that will do whatever it can to stay in power”.

“Things are changing very quickly and it’s now impossible to say where they might end,” he says. “The country might just go into a prolonged period of chaos but I can see the scenario where the government itself is toppled.”

Six weeks ago the mood was very different. The leaders of the four parties which make up the ruling Ethiopian People’s Revolutionary Democratic Front admitted that oppression was not quelling the protests, which civil rights activists say have left more than 1,000 people dead and seen tens of thousands detained. The government has released more than 6,000 prisoners since early January, including some prominent politicians and journalists. 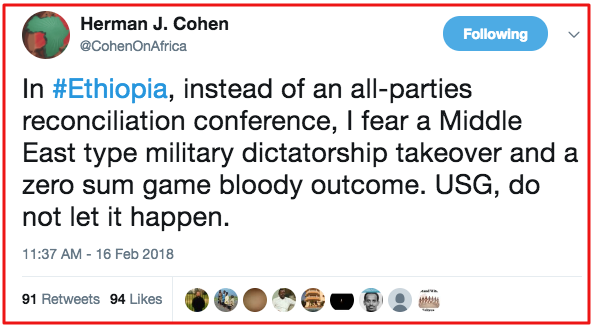 But their unprecedented U-turn this week is a sign of the growing pressure on the regime from its restless people. A state of emergency from October 2016 to August 2017 achieved little beyond creating a temporary veneer of calm in the restive regions of Oromia and Amhara. These areas are where there is the greatest feeling of resentment towards the ruling elite from the northern state of Tigray.

The governing coalition is dominated by the Tigrayan People’s Liberation Front (TPLF) but Tigrayans account for only 6 percent of the 105 million population. The two parties representing the Oromia and Amhara regions — which together comprise more than 60 percent of the population, are becoming more assertive in their demands for change as the EPRDF realizes it can no longer retain its traditional grip on power through force.

The unrest has also begun to threaten a core pillar of the government’s legitimacy: its development model that has been widely praised by international donors.

A combination of state-led initiatives and foreign investment in key sectors like low-cost garment manufacturing and infrastructure construction had made Ethiopia one of the fastest growing economies in sub-Saharan Africa, helping it achieve double-digit growth for much of the past decade. But in the last year, the economy has come under strain, with shortages of foreign currency becoming particularly acute.

Some analysts say the state of emergency might buy the EPRDF enough time to retain control of the country’s political evolution if the next prime minister is a reformer from Oromia.

“If the military and security services bow to public pressure and pressure from within the coalition to appoint a credible figure as prime minister it would calm down the situation, especially if they reach out to the opposition” says Betele Molla, a social sciences lecturer at Addis Ababa University. “But if they take the military route I can see bullets flying.”

Opposition politicians say that the appointment of a reform-minded prime minister would only be the first step. Mulatu Gemechu, a senior member of the Oromo Federalist Congress, one of the most prominent opposition parties, says calm will only be restored with “real change”.

“We need free elections, adherence to the constitution and a judiciary that is not a tool of the regime. But this regime cannot introduce real change if it wants to survive because it would lose power.”

Yohannes Gedamu, an Ethiopian political scientist at Georgia Gwinnett College in the US, agrees. He says the imposition of the state of emergency has only reinforced growing resentment towards the regime.

“The problem for the EPRDF is that the people really want regime change, they want the whole system to go,” he says. “A state of emergency will only delay the inevitable.”

US Denounce Imposition of State of Emergency

BY US EMBASSY (ETHIOPIA)

We strongly disagree with the Ethiopian government’s decision to impose a state of emergency that includes restrictions on fundamental rights such as assembly and expression.

We recognize and share concerns expressed by the government about incidents of violence and loss of life, but firmly believe that the answer is greater freedom, not less.

The challenges facing Ethiopia, whether to democratic reform, economic growth, or lasting stability, are best addressed through inclusive discourse and political processes, rather than through the imposition of restrictions.

The declaration of a state of emergency undermines recent positive steps toward creating a more inclusive political space, including the release of thousands of prisoners. Restrictions on the ability of the Ethiopian people to express themselves peacefully sends a message that they are not being heard.

We strongly urge the government to rethink this approach and identify other means to protect lives and property while preserving and indeed expanding, the space for meaningful dialogue and political participation that can pave the way to a lasting democracy.