An Arab Alliance Stretches Across the Red Sea

Gulf states have created a loose alliance structure in northeastern Africa, one that weakens their opponents and strengthens themselves.

The rationale behind the GCC’s (Gulf Cooperation Council) interest in northeast Africa is fairly straightforward. Gulf states are compelled to improve their relationships with these countries for security purposes. Installing bases in, and enhancing military ties with, these countries gives Gulf states an added layer of protection against conventional military attacks. (In fact, the United Arab Emirates has already begun to develop military installations in Eritrea.)

The conflict in Yemen, moreover, gives Gulf states a reason to desire added oversight of the affairs of Eritrea, Sudan and Somalia, which have little control over the arms and people that pass through them and end up in places like Saudi Arabia and the United Arab Emirates.

Another concern is that if Gulf States — which are, of course, Sunni — do not reach out to these African countries, then Iran, their Shiite rival, will.

The GCC is also interested in northeastern Africa for its agriculture. From across the Red Sea, Arab states see stretches of arable land that could feed their people as well as enough workers to make that happen. To that end, Saudi Arabia has prioritized agricultural investment in the region.

And at a May 2015 forum in Abu Dhabi, Sudanese and Emirati officials discussed nearly tripling existing Emirati investment into Sudanese projects, many of them agricultural. (Qatar has also recently invested heavily into Sudan’s agriculture and tourism sectors.)

Although the rationale underlying the GCC’s strategy is simple, the internal dynamics of northeastern Africa confound its execution. Take Egypt, for example. Egypt’s most important source of water, the Nile, binds it to other countries that likewise depend on the river for survival. But access to and usage of the Nile’s water has pitted Egypt against these upstream countries, particularly Ethiopia, whose tributary provides 59 percent of the Nile’s water flow in Egypt. Relations soured, in fact, after Addis Ababa constructed the Grand Ethiopian Renaissance Dam, which could halt the flow of water to Egypt. 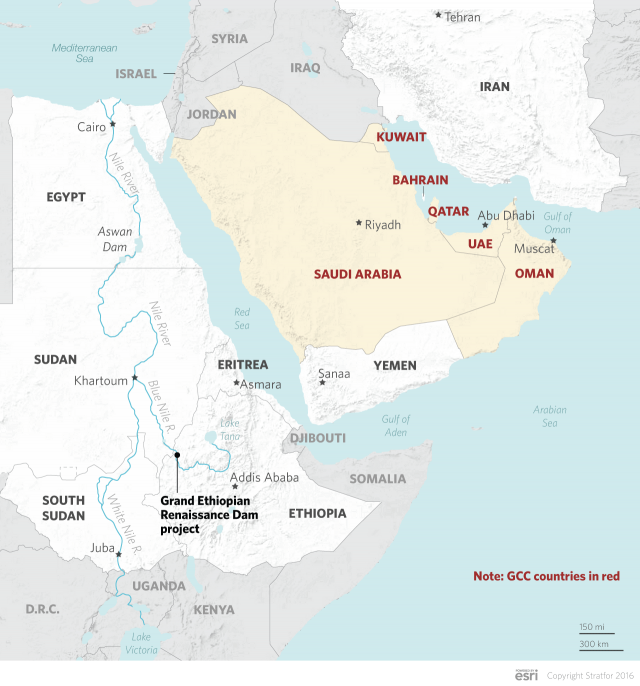 There is animosity elsewhere in the region too. Relations are tense between Ethiopia and Eritrea — unsurprising, considering Eritrea gained its independence from Ethiopia in the 1990s.

The obstacles created by these dynamics are not insurmountable, but they certainly present challenges. Saudi investment in Sudanese and Ethiopian agriculture is bound to upset Riyadh’s relationship with Egypt; water is simply too scarce a commodity for it not to be a point of contention. The fact that the United Arab Emirates is developing military facilities in Eritrea while Saudi Arabia improves its economic ties with Ethiopia may, moreover, create conflict down the line.

That is not to say Riyadh and Abu Dhabi would back one of these countries against the other if push came to shove. Doing so would contravene their interests. Nor are they interested in getting involved in a conflict that would only cost them time and money better spent elsewhere.

But the situation attests to how difficult the GCC’s foreign policy toward the region can be. With Egypt, for example, Saudi Arabia and the United Arab Emirates both feel the need to cultivate a better relationship, especially since Egypt is a majority Sunni state. But Abu Dhabi has a much better relationship with Cairo than Riyadh does currently. The Egyptian government, in fact, has been unwilling to capitulate to Riyadh’s demands of Cairo’s foreign policy.

Saudi Arabia and Egypt also disagree on the prospect of supporting Islamists, something Saudi Arabia is more willing to do when it benefits Riyadh — as it does in Yemen. The United Arab Emirates, however, has been steadfast in supporting Egypt, particularly when it comes to Egypt’s treatment of Islamists at home and in countries such as Libya. This explains why relations between the two have been warm since 2013.

A Testament to Importance

So far, the GCC’s strategy has been relatively successful. While Sudan and Saudi Arabia have long had a healthy economic relationship, Sudan tended to patronize Iran for its security needs. But that is no longer the case. After the conflict in Yemen started, Riyadh was able to convince Sudan to join its coalition. By rallying Khartoum to its cause, Riyadh received additional troops and, more important, a way to disrupt Iran’s smuggling operations along the Sudanese coast.

Similarly, the United Arab Emirates has plucked Eritrea out of Iran’s sphere of influence and placed it firmly in its own.

Gulf states have thus created a loose alliance structure in northeastern Africa, one that weakens their opponents and strengthens themselves. And though there is always a chance of conflict among such an alliance, constituted as it is by countries with divergent interests, there is also the possibility, however remote, of tranquility.

After all, if the GCC can convince Egypt and Ethiopia that the economic benefits of peace outweigh the cost of conflict, the alliance could create a semblance of stability.

Either way, the GCC is unlikely to stray from its strategy in the region. Rather than craft a uniform policy for the countries therein, Saudi Arabia and the United Arab Emirates will continue to cultivate bilateral ties for each respective country, even negotiating with and investing in different sides of historical rivals. That the GCC would go through the trouble at all is a testament to how important this region has become.

The Gulf Cooperation Council only sometimes lives up to its name — at least as far foreign policy is concerned. Led by heavyweights Saudi Arabia and the United Arab Emirates — and Qatar to a lesser extent — the bloc has a shared strategic vision of unity and strength to ensure its security on the world stage.

But for all their agreement on these specific foreign policy goals, the member states tend to pursue the goals differently, cultivating diplomatic, security and trade ties in ways that best suit their individual interests, even when dealing with the same country. These differences are on full display in northeast Africa, an overlooked region that presents as many risks as it does opportunities for Gulf states.