‘One-thousand troops to leave Somalia by the end of the year. The rest of the withdrawal process will be gradual and conditions-based’ :  Amb. Francisco Madeira

The African Union says it has begun its withdrawal from Somalia and will cut 1,000 troops by the end of this year as security responsibilities start to shift to the local military.

The continental body said Tuesday that the move comes at a critical time, less than a month after the country’s worst attack killed more than 350 people. The Somalia-based al-Shabab extremist group has been blamed.

The AU says its troop movements shouldn’t cause alarm, but the withdrawal has begun earlier than expected. Plans had said the first troops would leave in 2018.

The 22,000-strong African Union force in Somalia is expected to fully withdraw by the end of 2020. The United States military and others have expressed concern that Somalia’s security forces will not be ready by then. 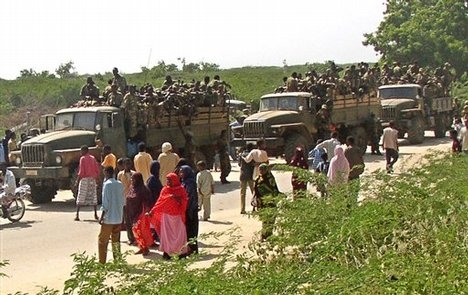 Hundreds of heavily-armed Ethiopian troops have crossed into Somalia, reportedly to assist a Somali government offensive against al-Shabab militants.

Witnesses who spoke to VOA Somali on condition of anonymity estimated that 1,000 Ethiopian soldiers entered Somalia. One resident said the troops were riding military vehicles and pickup trucks mounted with machine guns.

Ethiopia has thousands of troops in Somalia as a part of AMISOM, the African Union force fighting al-Shabab.
Regional authorities contacted by VOA on Wednesday confirmed the new Ethiopian military movements.

“The Ethiopian troops as a part of AMISOM have already been in the region, and their current movement is part of the response to the Somali president’s call for a massive attack on al-Shabab militants,” said Mohamed Husein al-Qadi, the deputy governor of Gedo region.

Local residents say they have not seen such heavy Ethiopian troop movements since 2016, when Ethiopian troops, who were not part of AMISOM, vacated a series of military bases, sparking fears of a militant resurgence and a possible setback for African Union efforts to stabilize Somalia.

The report of the new Ethiopian troops crossing into Somalia came as Somali government troops and their African Union allies prepare for a large-scale offensive against al-Shabab militants, according to multiple witnesses and government officials.

In advance of the offensive, the Somali government’s top leaders and the leaders of Somalia’s federal member states are meeting in Mogadishu for a second day to resolve political differences over the recent Saudi Arabia-Qatar diplomatic dispute.

During the opening of the forum Tuesday, President Mohamed Abdullahi Mohamed threatened to retaliate for the truck bombing of a busy Mogadishu intersection on Oct. 14 that killed more than 300 people.

Al-Shabab did not claim responsibility for the blast, but officials blamed the group and few Somalis doubt the accusation.

Somali Prime Minister Hassan Ali Khaire vowed Wednesday to defeat al-Shabab as he spoke at a graduation ceremony for more than 300 Somali National Army soldiers. The soldiers were trained at a military base in Mogadishu run by the United Arab Emirates.

Khaire said the troops signal the government’s commitment to “liberating our country from al-Shabab, the terrorist group. We have a full confidence that these troops will return the image of Somalia by eradicating the terrorists.”