Mark Cavendish of Team Dimension Data made it two stage wins in the 2016 Abu Dhabi Tour as he claimed the sprint finish in the final stage on Sunday at Yas Marina Circuit, beating Giacomo Nizzolo (Trek-Segafredo) in a straight sprint for the line.

Today’s final stage of the Tour brought Team Dimension Data’s 2016 season to a close as they were fully concentrated on delivering Mark Cavendish to what would be their 32nd victory of the season.

The team had done much of the work throughout the stage and they were present at the front still when the race headed into the final kilometers.

Jay Thomson and Eritrean Mekseb Debesay (both Team Dimension Data) were rolling through in conjunction with the Astana Team, who were riding in defence of the overall race lead, for almost 120km until Team Dimension Data took full control of the remaining final 25km.

The pace was so high that several splits occurred down the bunch, not least at the front when Mark Renshaw (Team Dimension Data) pulled out a significant gap on the bunch as they rounded the final corner.

Thomson and Mekseb relayed at the head of affairs to close the 1’15” gap to the lead riders while Cavendish lined up behind his lead out team of Bernie Eisel, Youcef Reguigui and Mark Renshaw. Thomson and Mekseb were truly phenomenal, until they were told to pull off of the front with 7km to go.

Eisel hit the front with 2km to go and when he was done, Reguigui followed with his maximal effort. Renshaw led through the last right-hander and when the road opened for Cavendish, there was no stopping the Manx Missle from winning on the home straight.

It was a beautiful stage win to end off what has been a fantastic season for Team Dimension Data, made sweeter with Cavendish also winning the Abu Dhabi Tour green points jersey.

The stage was left to Dimension Data to control, none of the other sprint teams wanted to help at all which was quite strange because we have won a stage and they haven’t. Nevertheless, we have the two strongest guys in the race to pull on the front in Mekseb Debesay and Jay Thomson. They just controlled the break incredibly and stayed so long that the leadout could take over easily. They gave us stability at the front and I had Bernie, Youcef and Mark to lead me out in the final 2km and they did an incredible job.

It was important to be at the front because there was a lot of wind and a lot of corners. Giant-Alpecin rider nearly got the jump on us so I thought it would do me a favour if one of them gets in between myself and Mark, so I let him in but he couldn’t hold Mark’s wheel in the sprint.

I was still able to use his slingshot and then Mark’s slingshot in front to accelerate in the last 200 meters. I am really happy to have won the stage again. It’s another win and good exposure for our sponsors and Qhubeka, so it was really nice to be able to do that.

* Dimension Data and Cycling News have contributed to the story. 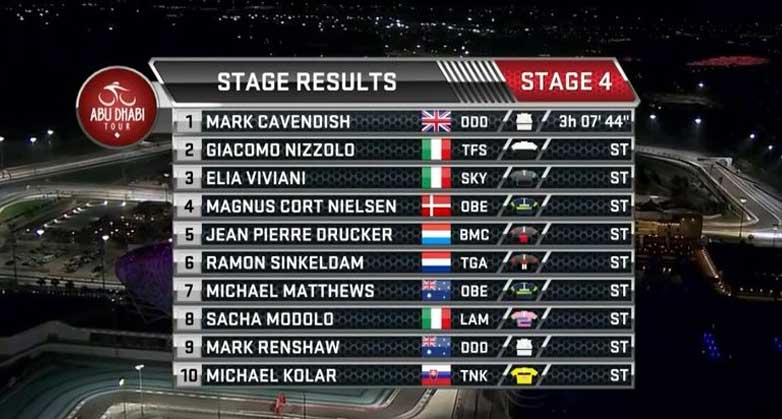