A Desperate Plea from Ethiopian Refugees in Yemen 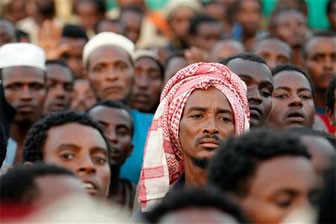 MANY foreigners are fleeing Yemen by sea to Djibouti because of the continued and discriminate Saudi airstrikes. I wonder why Ethiopians are not going to Assab which is very close from the Aden port to save their lives.

There is no report so far confirming how many Ethiopian refugees flee to Djibouti. As it happened before, though, Djibouti won’t hesitate to hand over these refugees back to Ethiopia. Those who fled Ethiopia for political reason have, therefore, two choices: Either to dig deep, hide and pray for the bombardment to stop or save themselves by taking the less than one hour boat ride and flee to Assab.

A statement of solidarity made by PM Hailemariam Desalegne today (April 2) on the current military intervention led by Saudi Arabia to defeat Houthi rebels is irresponsible that took no consideration of the over 50,000 Ethiopian refugees in Yemen.

For the first time in years, Yemenis are getting united because of the Saudi airstrike as it continued killing as many children, women and elderly.

As a consequence of such reckless statements, Ethiopians fear they are going to be targeted by the Houthi and their supporters, the same way they were targeted in Libya by the anti Gadaffi supporters.

Diaspora Ethiopians could raise money if there was a concerted action plan to save Ethiopian refugees from Yemen. They have done so last year when Ethiopians were attacked and killed in Saudi Arabia.

That same Saudi killing machine is now coming after Ethiopians, this time from the air and inside Yemen. So far up to 45 Ethiopian refugees have been killed when their camp was bombed last week as reported by several foreign medias.

That is a wake up call that needs our immediate response. Eritrean Assab port should be the immediate alternative to Ethiopian refugees in Yemen and the Eritrean government should heed the call and open its port for Ethiopians who flee to save their lives from the Yemeni crisis.