Up to 700 African Migrants Feared Dead Near Libya

Last week, 400 migrants were presumed dead in the sinking of another ship near the Libyan coast.

UP to 700 African migrants were feared dead on Sunday when their boat capsized off the coast of Libya overnight, the Times of Malta reported.

Twenty eight people were rescued in the incident, which happened in an area just off Libyan waters, 120 miles south of the southern Italian island of Lampedusa, the newspaper’s website reported.

The emergency was declared at about midnight. The boat is believed to have capsized when migrants moved to one side of the vessel when a merchant ship approached.

If confirmed, the disaster would be one of the worst seen during the decades-long migrant crisis in the southern Mediterranean and would bring the total number of dead since the beginning of the year to more than 1,500.

“At the moment, we fear that this is a tragedy of really vast proportions,” Carlotta Sami, a spokeswoman for the United Nations High Commissioner for Refugees, told SkyTG24 television.

Last week, 400 migrants were presumed dead in the sinking of another ship near the Libyan coast. The deaths have raised calls for a more robust search and rescue of the seas between Libya and Europe amid a surge in migration between the Middle East and Africa toward Italy.

On Thursday, Italy’s migration crisis took on a deadly new twist as police in Sicily reported that Muslim migrants had thrown 12 Christians overboard during a recent crossing from Libya, and aid groups said another 41 were feared drowned in a separate incident. 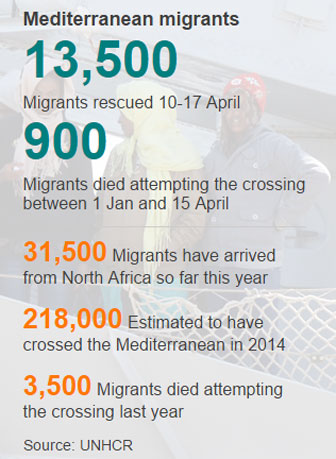 Palermo police said they had detained 15 people suspected in the high seas assault, which they learned of while interviewing tearful survivors from Nigeria and Ghana who had arrived in Palermo Wednesday morning after being rescued at sea.

The 15 were accused of multiple homicide aggravated by religious hatred, police said in a statement.

Presidents, prime ministers and the Pope have all described their horror at the massive loss of life and spoken of the need to do something quickly to stop it.

But will their powerful and emotional statements lead to a new EU approach to tackling the migrant crisis, including the provision of more ships capable of search and rescue?

Deep divisions between the 28 EU member states were laid bare last year when Italy stopped its search-and-rescue operations after plucking more than 100,000 people from the sea.

The EU replaced it with a much smaller operation run by its border control agency Frontex, which has a limited mandate, a third of the budget and a fraction of the manpower used by the Italian navy.