2016 was a year in which Eritrea celebrated its independence jubilee anniversary. It was quite a year. Most of all it will be remembered as the year when the distorted media narrative on Eritrea finally started unraveling like a cheap sweater in the wash.

It was a year in which everything started to come together for Eritrea after years of Western harassment and media war waged on its people and government. Eritrea’s patient, long-term focused bottom-up approach to development and nation-building started attracting partnership projects focused on geothermal energy, solar powered drip irrigation, and educational capacity building to name a few.

The extractive industries kicked into high gear with more and more mining companies transitioning into a production phase and a mine life of 200-years Potash project moving into the engineering design, procurement and construction (EPC) phase. Eritrea’s virgin Red Sea coastline, with its significant hydrocarbon and natural gas reserves, was declared open for oil and gas exploration in late 2016.

Meanwhile, south of the international border, anti-Tigrayan revolt spread across Ethiopia like wildfire with brush fires popping up everywhere over the Tigrayan minority regime’s apartheid rule, stranglehold on government and kilil Tigray’s nasty habit of land grab. Tigrayan symbols and businesses were particularly targeted and destroyed. Though temporarily halted by turning off the internet and mobile access in Ethiopia, the 2016 protests have marked the beginning of the end of the TPLF era and can be expected to continue into 2017 and beyond. TPLF’s response to the nationwide protests thus far has been more oppression, further crackdown and cabinet reshuffle, which means that it is still sitting on a barrel of dynamite.

Perhaps one of the most significant achievements in the diplomacy and national security arena was Eritrea’s deepening relations with the Gulf Cooperation Council (GCC) countries of United Arab Emirates (UAE), Qatar and Saudi Arabia. The United Arab Emirates has constructed a new air and naval base at Assab that is being used by UAE and Saudi fighter jets and naval vessels operating in the area.

Defense analysts have indicated that the construction of a new port at Assab is to become the UAE’s first permanent military base in a foreign country. It is not difficult to see the economic and security benefits that would accrue the State of Eritrea by cooperating with its Arab neighbors on security, diplomacy, economic and military matters for the safety and security of the world’s busiest shipping line. 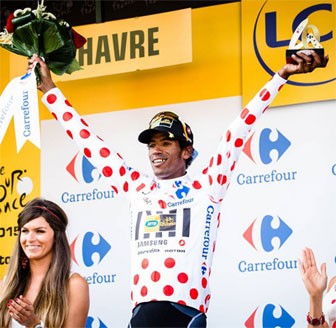 And what a year it was again in the sports world for Eritrean athletes. Daniel Teklehaymanot won the Polka Dot jersey for the second year in a row as the best climber at the Criterium du Dauphine and was joined by his fellow Eritrean Team Dimension Data teammate, Natnael Berhane, at the Tour de France.

The gritty Tesfom Okubamariam was named the 2016 African Cyclist of the Year. A number of young cyclists turned professional again in 2016 representing Eritrea at international competitions.

The biggest sporting achievement of the year, however, goes to Ghirmay Ghebreslassie’s conquest of the “Big Apple” by winning the 2016 New York City Marathon, the largest and best known marathon in the world. New York City, affectionately known as the Big Apple, is the media, fashion, finance and publishing center of the world. It’s where the United Nations and Wall Street are located. They say if you can make it there, you can make it anywhere. In 2016, Eritrea’s Ghirmay Ghebreslassie, barely out of his teen years, won the New York City Marathon and waived Eritrea’s flag as the newly crowned champion right in the backyard of the United Nations Headquarters.

The only regret was that the late Ambassador Girma Asmerom, Eritrea’s Permanent Representative to the United Nations, did not live to see it. Oh, my how he would have enjoyed it. He missed Ghirmay’s conquest of the Big Apple by one month.

The highlight of the year for Eritrea was its jubilee anniversary celebrations that spanned the entire globe. The jubilee (Iyobel) was celebrated with gusto in Eritrean communities around the world. The Torch of Independence traversed through Eritrean towns, villages and battlefields of the armed struggle for independence right up until Independence Day on May 24 and was ignited by Olympian Zerisenay Tadese at Asmara’s Bahti Meskerem (September 1st) Square.

Eritreans around the world felt a mix of pride and nostalgia as they watched their nation celebrate its jubilee anniversary. Musical bands, orchestras and a cast of performers came from countries like Germany, Bolivia, Turkey, Uganda, South Africa, United States of America, Australia, Japan, and China to help Eritreans celebrate their country’s milestone event.

Diaspora Eritreans flocked to the homeland to pay homage to the Eritrean State and became a source of confusion for newspaper editors in Europe that had a distorted image of Eritrea in their head. British journalists reporting for the BBC on the jubilee anniversary celebrations from Eritrea had their lines deleted by their editors in London because their editors couldn’t reconcile the reality on the ground that was being communicated to them with the biased and distorted images of Eritrea they held in their head.

Fair-minded Western reporters confessed to how they were forced to empty out everything they thought they knew about Eritrea from their head and start from scratch to learn the reality on the ground when they visited Eritrea.

The jubilee celebrations showed that the spirit of Eritrea has not diminished since 1991. On the contrary, it has flourished. The state that the experts advising Weyane thought would collapse within six months in 1998 lives more vibrantly today in 2016.

It was also a year that saw some 10,000 plus impassioned Eritreans descend on Geneva from all corners of Europe to denounce the biased and bogus fabrications of the Commission of Inquiry’s (COI) Report. The COI’s report was an attempt at a systematic delegitmization of the Eritrean State. Having failed to destroy Eritrea by conventional arms and psychological warfare, Eritrea’s enemies had settled on a sinister tactic that hampers Eritrea’s ability to defend itself and protect its sovereignty. In the end, thanks to the strong stand the Non-Aligned Movement countries took on the matter, the pile of rubbish Mike Smith and Sheila Keetharuth came up with by interviewing faceless and anonymous accusers coached by the TPLF not only was NOT forwarded to the Security Council for referral to the ICC, but it was also rightly poo-pooed as something of a report that failed to meet even the basic standards of research to ensure the report is fair and free of bias.

The biggest surprise event of 2016 was the election of Donald J. Trump to be the 45th President of the United States. Only few expected it. No matter how much Eritrean-Americans may disagree with Mr. Trump on his domestic policy stances, the incoming Trump Administration undoubtedly has the opportunity to look at United States foreign policy toward the Horn of Africa with fresh eyes. Fresh eyes are badly needed with respect to United States foreign policy toward the State of Eritrea.

Mr. Trump, in a move away from Ivy League academics has filled his cabinet with billionaires and business titans that are expected to bring a pragmatic business mind-set. At the very least, they will not weaponize the issue of human rights in the way Hillary Clinton and Susan Rice did. There will be new players and some old hands such as John Bolton, who was fair to Eritrea while serving at the United Nations, and is well informed on Weyane’s intransigent behavior.

Trump’s Secretary of State nominee, Rex Tillerson, is an oilman. He is the Chairman and Chief Executive Officer (CEO) of Exxon-Mobil and former President of Exxon Yemen. It’s probably a safe bet that he will be more interested in Eritrea’s hydrocarbon potential than weaponizing the issue of human rights against the State of Eritrea. In fact, Exxon-Mobil is already involved in the marketing of petroleum products in Eritrea.

Lastly, it is a fact of life. Scores of notable people and beloved members of our community pass away each year. In 2016, the Eritrean-American community said goodbye to an unusually high number of its most beloved members. To name just a few: Ambassador Girma Asmerom, Haile Abraham, Dr. Amdetsion Kidane, and Dr. Samuel Mahaffy. We miss them dearly and will always remember them. For as long as we live, they too will live.

Merry Christmas and Happy Holidays to all Eritreans around the world. May 2017 bring lots of Shishay for Eritrea.